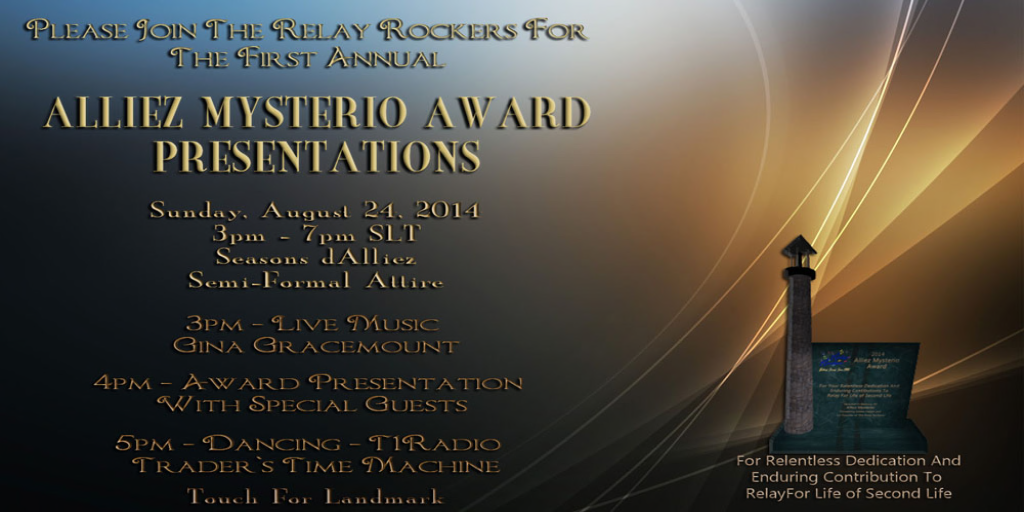 The Relay Rockers announced today their plans to present an award in honor of their late co-founder Alliez Mysterio.

"To honor our friend and co-founder The Relay Rockers have established the Alliez Mysterio award. The award recognizes those people who have, like Alliez, made a lasting contribution to the world's biggest virtual event, The Relay For Life of Second Life.

Beginning this season the Rockers will present the Award to the Relayer(s) who they feel best exemplify Alliez' dedication by their contribution to Relay.

The award will be given to the person or persons who, in the opinion of the team's award committee, have exhibited "Relentless Dedication"  and have made an "Enduring Contribution" to the Relay For Life of Second Life. " 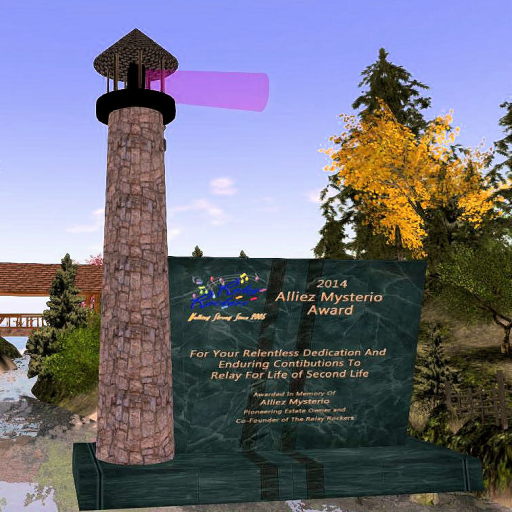 Alliez Mysterio came to Second Life in 2003.  A pioneering virtual explorer Alliez saw the potential of the nascent private island sims and in 2005 her first sim, Rue d'Alliez opened.  From that single island d'Alliez Estates spread over the grid, growing to more than 150 islands.  She established a system of ownership and rentals that has provided a home to many residents of Second Life regardless of their virtual manifestations, lifestyles or interests.  She made every effort to accommodate her tenants, was always there to address issues and was loved by all who came to know her.

In 2005 she joined with Trader Whiplash and Nuala Maracas and formed the team that became known as the Relay Rockers.  From 2005 until breast cancer took her from us in 2013 Alliez was a steadfast supporter of both the Relay Rockers and Relay For Life of Second Life.

Alliez Mysterio left an indelible imprint on our virtual world and she is missed by one and all. This Award will honor both Alliez's memory and the dedication of the awardees.

The award is to be presented at the team's Thank You party, August 24, 2014. The Rockers, who celebrated  '10 Years Walking Strong'  this season finished with the highest possible fund raising level, Purple.  They raised more than L$5 million through their signature events, Bid Me Bald and the Celebrate-Remember-Fight Back Top DJ Competition.  They were also honored during Relay weekend with the coveted "Returning Team Participation Award" as well as 1st place for  The Inventive and Creative Fundraising Award and 2nd place for The Cancer Education Campsite Award.

The party, which will be held at  Seasons dAlliez  ( http://maps.secondlife.com/secondlife/dAlliez%20Land%20Headquarters/61/57/23 ),  will feature Gina Gracemount, a team supporter and Bid Me Bald 'Victimteer', performing live at 3pm and close with T1Radio's Time Machine - the 60s, featuring Trader Whiplash. The 2014 Award Winner(s) will be announced at 4pm by Rockers Founding Captains Nuala Maracas & Trader Whiplash, 2014 Team Captain Ariel Stormcrow and Sue Peregrine, Alliez's daughter and CEO of dAlliez Estates."

Everyone is invited to attend and are asked to dress in semi-formal attire.