The 2014 Making Strides Against Breast Cancer Across Second Life season will begin on September 1, 2014 and will continue until October 31, 2014. 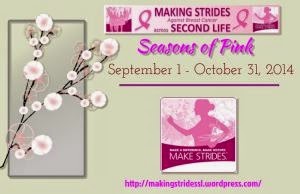 Please contact Jessii2009 Warrhol or Gem Sunkiller in Second Life if you would like to get involved with the 2014 Making Strides Against Breast Cancer season in Second Life.

About Breast Cancer:
Breast cancer is the most common cancer among women in the United States, other than skin cancer. It is the second leading cause of cancer death in women, after lung cancer. 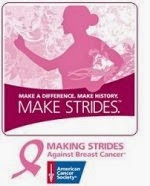 For more information please visit the sites below:
http://makingstridessl.wordpress.com/

http://www.cancer.org/
Posted by Bixyl Shuftan at 6:00 AM