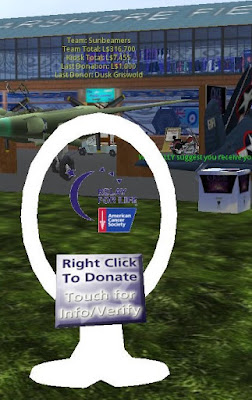 Yesterday June 11, Relay for Life in Second Life's Team Sunbeamers achieved another milestone. As their yearly Air Show in Pacific Waters was winding down near 4PM SL time, the last of the Lindens needed to put this year's team total over 315,000 Lindens were donated, and so the team had finally reached the coveted Gold Level.

Rita Mariner, the dual head of both the Sunweaver community and it's Sunbeamer team announced the news of the achievement, as well as the results of the "Bid Me Pink Part Two" event.

Beamers!  Today with the efforts of Cynthia, Shocky and many people bidding me PINK for 2 weeks, our team is now officially GOLD!  I am so proud of you.  Hugs and kisses all around!  To those of you who missed the Air Show, you missed one heck of a good time, lots of planes, cannons shooting parachuting, period music, good friends, aerial acrobatics.  Getting to the next level is NOT on my list, but we can still add to the pot and have fun while we do it

Rita would also credit Skylark Lefavre, the Sunbeamer's events coordinator, for their success in the event, as well as that of the team's season.

And so, the Sunbeamers have once again maintained their reputation as a top-ranking team. But they're not done yet. The team will continue to be a presence in multi-team events. And Skylark is reminding a certain fox reporter of his promise to "go pony" for a week should the team hit Platinum Level. And of course there are the preparations for the Relay Weekend in July. So it's hardly over for Team Sunbeamers.