Ebbe Linden at the SLB 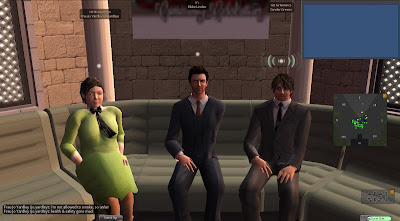 At 3PM SL time at the SL13B Auditorium all this week, "Meet the Lindens" events have been taking place. On Monday, Brett and the popular Torley Linden were interviewed. On Tuesday, it was the turn of Ebbe Linden, Ebbe Altberg in real life, the CEO of Linden Lab. The interview was carried out by Jo yardley, with help from Zander Green, with Saffia Widdershins taking questions from the audience. Yours truly was also in the audience, taking notes the best he could.

Ebbe at first talked about what he did before coming to Linden Lab, stating he had worked with "technologies that empower people," having worked at Yahoo. He described himself as being involved with Linden Lab since almost the beginning, a man he had known since college whom was working with the Lab had approached him "back in the day" when Second Life had barely started, eventually meeting Philip Linden. He got the overall concept of the virtual world, which was further sharpened by his oldest son becoming a user. He saw it as "an incredible opportunity for someone to go online and create ... do business." When he was approached with the offer to lead the Lab, it was an opportunity he couldn't turn down.

Ebbe Linden stated he wanted the residents of Second Life to be "passionate" about their virtual world. He was impressed with what artists and others were doing, and the "sheer complexity of user creativity," calling the place a "complex ecosystem." He called virtual reality a "huge opportunity," albeit one with a "huge number of problems to be solved." As none of the bigger corporations were involved, in some ways it was "uncharted territory." He gave praise to the builders and roleplayers whom were in "lots of communities" with "lots of reasons for being here." He emphasized the diversity of the virtual world where the residents could "learn from each other, share with each other ... incredible blend of things, awe-inspiring to me."

"I can't take much credit for Second Life. I've tried to do good things in the past couple years ... have had a good team with me."

Ebbe would then answer some questions. On Oculus Rift, Ebbe stated that integrating it with Second Life properly had been a "huge effort" as the virtual world hadn't been designed with it in mind. In contrast, Sansat had been designed with the virtual headset in mind. But he did say that some video cards had just come out that would be of help with using Oculus Rift in Second Life.

Asked about when proper mirrors could be available in Second Life, Ebbe stated he couldn't answer that question as there was no signs of the technical problems involved being solved.

When asked about recent fluctuations in the value of the Linden dollar, Ebbe answered the problem was between the users of Second Life and Linden Lab was staying out of it, at least for now, "we're on the sideline's watching it." He stated the Lab could get involved if it wanted to, such as increasing the supply of Lindens, "but we're trying to be passive and let the market go where it wants to." As to how it started, Ebbe felt as the number of users of Second Life had remained very stable, it was possible the value fluctuations could be related to some decisions made by Linden Lab such as discontinuing third party currency exchangers and the chance for residents to gain grandfathered pricing levels.

Asked about Sansar, Ebbe stated it would have a "different feel" than Second Life. While like Second Life there would be a great deal of freedom on what one could do, it was still under development and until it had been developed more, "we don't know quite hoe it's going to be. ... Sansar is not trying to be the same thing as Second Life. It's supposed to be a different product. ... For some, it will not be as good as Second Life." While there would be some "overlap" with what could be done in Second Life, there would be differences.

Asked about Sansar's avatar controls, Ebbe stated that they were still being worked on, "we can't fly, yet." But there was the option for either a first person or third person point of view. As now now, avatar customization options were very limited, but this too was still being worked on.

Ebbe was then asked if users of Sansar would have the option to chose their own names for their avatars, or would they be having to use real-life identities. Ebbe answered he was leaning to the latter, "I think what's best for Sansar is real names. ... anonymous identities makes things confusing." 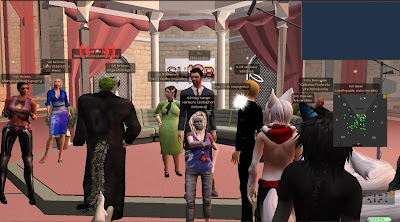 After the interview was done, Ebbe got up, and those in the audience were invited to walk up to say hello, or pose for a picture. One girl posed in front of him with a "selfie stick," much to the amusement to a few.

On Wednesday today, Landon and Oz Linden will be interviewed. On Thursday, Pete and Xiola Linden get their turn. Finally on Friday, Patch and Dee Linden will close the "Meet the Lindens" events.

Addition: Inara Pey later put some transcripts of the event on her newsblog (here). Among what the transcripts shown was an important line of dialogue that I had missed.