The "Harecut" at Club Cutlass 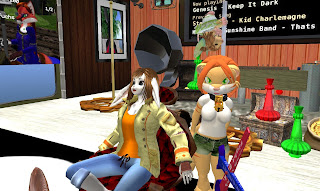 Last Wednesday June 1, it was the last day for people to bid on the three "Bid Me" events for the Relay for Life team representing the Sunweaver community: Team Sunbeamers. Rita Mariner's "Bid Me Pink" generated the most interest with over 27,000 Lindens raised, but more had been donated to the "stay white bunny" side, so she got to remain the same. So the spotlight then switched to Becky Shamen, whose "Bid Me Bald" had raised over 15,000 Lindens, with most of the money going to the "Bald" kiosk. So Rita rezzed a barber chair, and got a pair of scissors provided by Trader Whiplash. Becky appeared a little less than thrilled about the idea, judging by this screenshot. 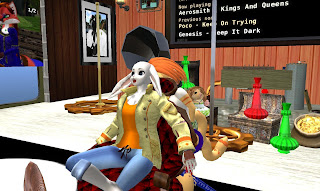 And so Rita began snipping away. One of the 'weavers kept joking, "Queen of Hearts: 'That's enough! Off with their heads! .. I mean hair.'" "Oh what a nice necklace you have there.. wait.. are those.. Earlobes?" "Rita .. Rita that is called Epidermis .. you can stop snipping." Finally, Rita was done snipping the head hair, "Done. Ok, you're BALD for 4 weeks." "Now she needs a nice massage for the head with some oils.. also against the itch of growing back." Becky managed a chuckle, "regardless of which av I wear, for the next 4 weeks, it will be bald." Rita mused, "She could wear a bowler, from a 007 movie, and be Oddjob." 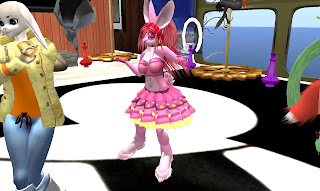 To keep those who had chipped into the "Bid Rita Pink" vendor, Rita posed for the camera in her pink bunny avatar briefly, "We are doing good, but if they had taken the bait and out bid me to turn me PINK, we would be that much closer to GOLD. Of course I would be PINK for 6 weeks, and have to burn those avatars and clothes after I was done. *laughs*" It was pointed out that the team was already past the 2/3 mark to Gold Rank.

Becky Shamen would also do a video of the event: Click here.

Of Rose Evans' "Bid Me Human," which raised over 10,000 Lindens, she had this to say, "Since I lost the Bid Me and I'm going to be a human for the month of June, I am presently working on a more generic human av based on my neko avs to use for the extended period."

As of the writing of this article, the Sunbeamers have raised 209,800 Linden dollars this year for the Relay for Life. They're not done yet as they have other events as the season goes on, the next one being their annual air show in Pacific Waters, planned for Saturday June 11.