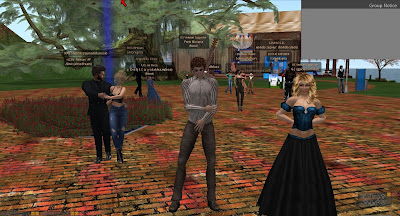 On Sunday August 28, Frets Nirvana held his monthly benefit at Veterans Isle. The event is to raise funds for the veterans charity Homes For Our Troops. The event took place from 5PM SL time to just after 9PM (Midnight EST), and besides himself included singers Zak Claxton, Srv4u Conacher (Da Bluez Preacher) and Hogan Baily. 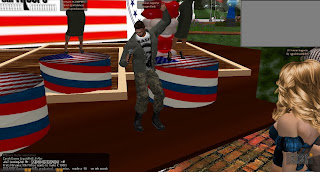 Come out, support and help us by helping our severely wounded veterans through Homes For Our Troops. To learn more about the Homes For Our Troops visit https://www.hfotusa.org. We have another great lineup of premier talent from the Second Life musician community.

The money was donated into house shaped kiosks on either side of the stage. Frets would throw in some Lindens of his own once certain levels of fundraising were reached, at one point dropping in 10,000 Lindens. Zarah Dawn offered, "Anyone donating 2k message me and I'll make you a custom jewelry set." Dahlea Milena, the hostess for the event, told people she had served in the military for twenty-two years, "I had friends still serving, and children old enough to serve or almost old enough. At least one of my child's school friends is no longer with us because of their service after 9/11."

A total of 121,250  Lindens was raised that night. Although Frets does a few HFOT fundraisers at other venues, the monthly benefit at Veterans Isle is still his best known and usually most successful one.

"Thank you again Frets for helping to organize all this."