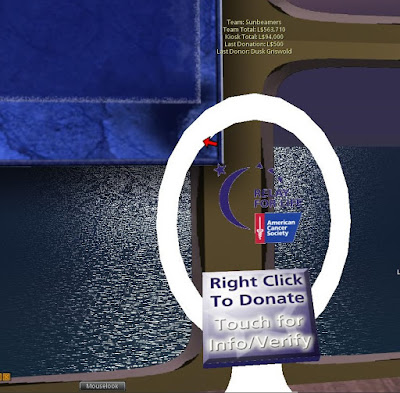 The Relay for Life's Sunbeamer Team has never known when to quit. Born from the ashes of the Passionate Redheads after the longtime successful Relay team folded, the "beamers" have strove to continue their success. While they had something of a bumpy start as a team in their first year, 2013, they did manage to reach Silver level in fundraising. In every year after that, the team would strike gold. At the beginning of this season, the team would have a slow start due to the economic troubles of some members and personal problems of a few, reaching only 50,000 Lindens by May. But by the end of the month, it had reached Silver rank, and by mid-June, it had reached Gold.

But the team still kept making fundraising efforts, members such as Skylark Lefavre and Cynthia Farshore appearing at multiteam events and setting up a kiosk. While the Relay Weekend means the end to the fundraising efforts of many teams, the leaders of the Sunbeamers saw a chance to make one more rank: Platinum. While the Passionate Redheads had reached the level a number of times, this would be a first for the "beamers."

Beamers:  We have a chance to reach Platinum, by AUG 14th, Cynthia and I are willing to kick in a major amount of cash to get there, but we would like help from the team and others to help us out.  We need $345 worth on Lindens to make Platinum.  So please give what you can into the kiosks, ASAP. Cynthia and I will make up the balance.

On Saturday July 30th, the day of the Sunbeamer's Road Rally, donations came in throughout the day and night, and not just at the racetrack. After the event, donations continued to come in, 15,500 Lindens were dropped in by Oriana Sun alone at the party in Club Cutlass that night. At 8:22PM SL time, Cynthia Farshore announced, "SUNBEAMERS JUST HIT PLATINUM!!!" 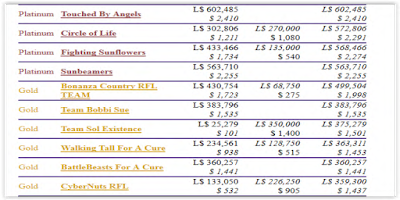 Finally, the team had achieved what it's members hadn't seen since the days of the Redheads. If Gold meant proof we were among the big leagues, Platinum was confirmation. As of the writing of this article, the team has raised a total of 571,160 Lindens, or $2,285 US dollars. This makes them the 19th highest ranking team, having raised almost as much as one of the major events: the Relay's Science Fiction Convention.

But, I did have to make good on an avatar challenge I had set up if we reached this level.

Beamers thanks to generosity of Cynthia, Oriana, Dusk and your bunny boss, along with what we made at the Road Rally and Pool Party.  The Sunbeamers are now officially PLATINUM!  Bixyl get that pony ready!  LOL 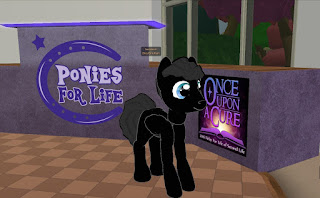 My friend Skylark Lefavre is a "My Little Pony" fan, and has kept asking me to wear one of the MLP avatars in Second Life. This was the one type I had never worn. Finally last year, I told her if the team ever reached Platinum rank, I'd wear one for a week. And since Skylark "ponied up" so much time, and Rita "ponied up" so many bucks, I went ahead and went through my end of the bargain. I can still change out of it briefly for interviews and similar circumstances. But when just going about, it's on horseshoes, at least until Saturday.

So far, there's been a number of reactions. Among them, Liška Bystrouška (liska.fuchs). "Poor Bix is gonna be saddled with equine puns." Oh well, reporters always have to deal with the occasional "neigh"sayer.