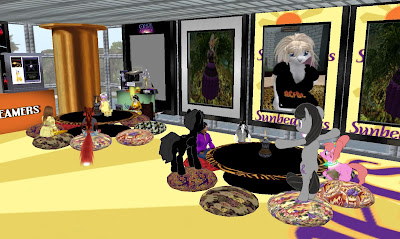 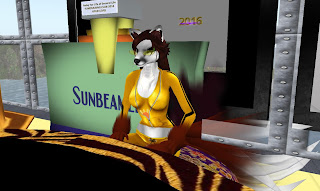 On Sunday July 31st at Noon, Rita Mariner held a meeting of the Sunbeamer Team, the team of the Relay for Life representing the Sunweaver community. Held every year between the Relay Weekend and the "Relay Wrap Up," the meeting is both to congratulate one another for their successes and to swap a few ideas for the following year. Besides being happy that our campsite had gotten an award, we were still a bit fired up for having just reached Platinum level fundraising for the first time since the days of the Passionate Redheads.

Many members of the team had made contributions besides Lindens. Shockwave Yareach and Cynthia Farshore, with help, did the campsite. Becky Shamen did a number of items for the team. Alleara Snoodle, whom once did a uniform for the Redheads, had made a women's tracksuit for the team this year. 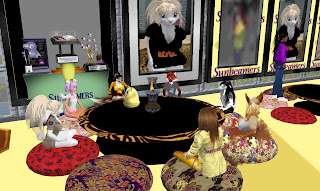 Since the theme for next year's Relay won't be revealed until the "Relay Wrap-Up," we couldn't really toss around many ideas for the camp build. One was a possible "greeter" that would say hello to everyone by name who entered the camp, but would depend on someone with Alleara's skills to make it; otherwise it would produce some lag. Cynthia Farshore had the idea of an "air race" for next year's air show. There would also be at least one "Bid Me Human" event.

It's been a great Relay season for the Sunbeamers, and we're confident on repeating it next year.