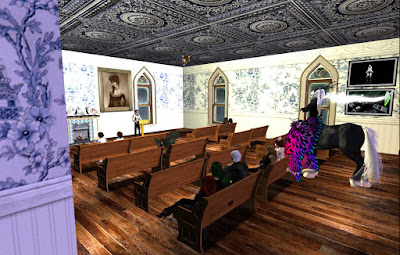 On the night of Tuesday August 2, Fuzzball Ortega, the former sheriff of the noted Steelhead Steampunk community, hosted a reunion meeting with about a dozen members of the group. It was close to a year ago in which the owner of the community's land, TotalLunar Eclipse, reluctantly made his decision to close the estates due to real-life problems and Linden Lab locking out his account in a dispute. While one sim, Nevermoor, was eventually saved, the rest could not be, and closed sometime in November. While the members of the community have scattered, mostly across elsewhere in the Steamlands of Second Life, many if not most have remained in the group. Last weekend, Fuzzball called for another meeting in the second story of Club Gearz, which had been relocated to Port Caledon, if nothing else to discuss possible themes for it and Willow Leafstorm's Green Fairy club still in Ravenwood Forest (former Nevermoor). But he imagined there were many who missed the crazy town hall gatherings, "And besides, when was the last time you said 'Floppy Dong' at a meeting?" 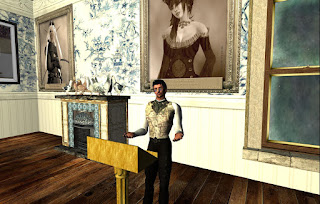 Fuzzball had added a number of pictures of various Steelheaders, from Lunar and Tensai Hilra behind him. Among those attending were Baron and Zantabraxus Wulfenbach, Softpaw Sommers, Willow Leafstorm, Rezzdammit (who sent me the pictures and the minutes), Jimmy Branagh, and others. Sadly Invertigo Caldwell, the "bad blue wolf" whom had caused no shortage of chaos for a time, has been absent from Steelhead activity for over a year.

They discussed the "Almost Lag Free Relay Weekend," which a number took part in other teams as the "Stealhead Salmons" were inactive, "but we'll give it another go, next year, if folks are interested." People were, "It felt...off , to not have a Steelhead campsight." Fuzzball stated he had run 21 laps around the track, but had no comment when Rezzdammit asked if it was all in his wolf form and he was being chased be a girl in a little red riding hood. 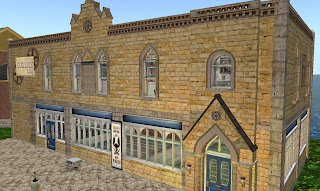 Themes were selected for their Friday Night dances, which alternate between the Green Fairy and Club Gearz, the Olympics being the theme for August 12. Fuzzball is still looking for pictures for the second story walls, "there's more photos to be added." Steelhead's school may start again soon, "AthenaeumArchivist is interested in teaching the fresh young minds."

After about an hour, the meeting was adjourned with a number of "Hoooooooo!"s. "Thank you for coming out. I do miss seeing you guys on a regular basis."