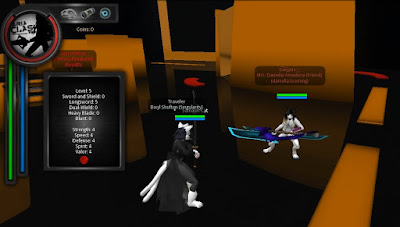 Second Life isn't really a game, though residents often call it one for the sake of simplicity. But we can play games on it, some of which have rivaled the MMOs we put down money for.

It was five years ago in which the Newser reported on Aria Clash, an anime-inspired combat game, what one described as a “feudal Japan/sci-fi crossover” fought either with melee or ranged weapons. In my personal opinion, this was one of the best combat games in Second Life developed before, or since. Sadly, Aria Clash did not last, shutting down a little more than two years later. Developer Kamiko Fazuku stated she had to close down the gaming area and further development of the game due to real-life complications, and credited the loyalty and faithfulness of her team for the reason it had lasted so long, saying she had heard of many others fall apart due to internal drama.

Yours truly would return to Aria Clash several times since the article, having fun with development team memeber, Aasha “Geecku” Kohime, or my friend Daniella Looming in the picture above. This included at least one "boss fight" which was just as big a pain as an MMO boss fight ro win.

While yours truly has come across some games since, there's been nothing quite like Aria Clash. What games have you the readers been playing?