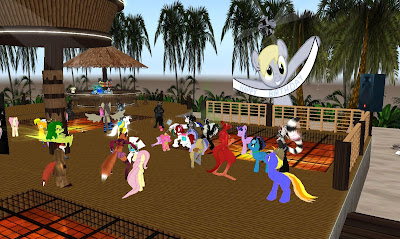 Sunday August 7 was the date of the fourth anniversary party of the Derpyland sim. Starting at 3PM SL time, and ending some time after 6PM, the party some called the "DL4B" attracted a good-sized crowd. Although it was Derpyland which was having the anniversary, the party took place in the Trotsdale sim. DJ Dashy (Shippo849) provided the tunes in the hour I was over. I didn't hear anything that sounded like it was from the cartoon, mostly pop and 80s music, such as "Take on Me," "Rebel Yell," and "It's My Life." 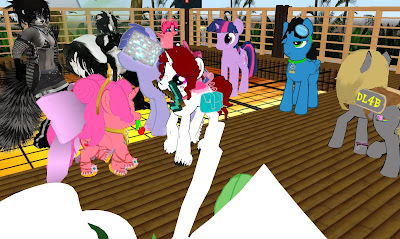 Skylark Lefavre, the manager of the Happy Vixen, was among those there. So was Scentuallust, the owner of Derpyland and a co-owner of Trotsdale. Commenting about a pony that sat to the DJ's left as a self described bodyguard, Scent joked,  "We all know Dashy can't have a Right Guard because I make Right Guard turn left." There were also a few jokes about ball pits and cons, "Every con I go to is suffocated with deodorant perfume and nasty soap."

But it was good clean fun for everyone. And if anyone has to ask, yours truly went as his usual foxy self, and not the one from the week-long avatar challenge from the Sunbeamer team going Platinum. As it turns out, Scentuallust was the leader of a team that built a free pony avatar that can be found at Derpyland Square, Derpyland (41/185/21).