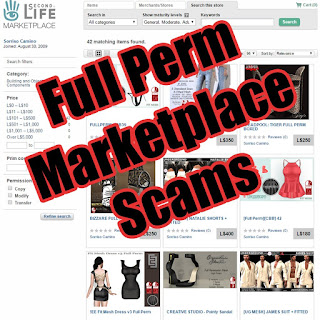 Strawberry Singh recently wrote about an apparent problem on the Second Life Marketplace after being contacted by the maker of full permissions, or Full Perm, items which he sold on Second Life's Marketplace. Unscrupulous individuals are taking such items, and placing copies up for resale on Marketplace, not bothering to get permissions or give any kind of compensation to the content creators. Unless the offending party agrees to take down the items themselves after being contacted, the only recourse for the creators is to file a DMCA (Digital Millennium Copyright Act) takedown request with Linden Lab "over and over until they are taken down, but then they must also DMCA items that are being sold by people who have bought these illegal full perm items and are selling them in their stores thinking they have a legal copy of the item."

Unfortunately, while sometimes this is the end of the ripoff, sometimes it continues, "A DMCA take down usually takes a week to be taken down, but the next day, that account puts it right back on that same Marketplace as a new listing."

Strawberry offered the following suggestions of "some of the things that you should look for and be aware of before making a purchase."


Before purchasing look at the seller’s other listings. If there is a hodgepodge of brand names and the vendors all look different, they are most likely an illegal seller.

Purchase the items from the inworld store of the full perm creator instead of the marketplace, to ensure that you are not purchasing from an illegal seller.

Most of the illegal sellers have blank profiles. Real full perm sellers usually have a full profile filled with links to their websites, mainstores and marketplace stores.

Most Full Perm sellers have started using water marks on the vendor ads which say the name of the avatar that is supposed to be selling it. The illegal sellers are still using those ads, even with the watermark. So it is important to look at the name of the creator on the watermark, and if it isn’t that person selling it, don’t buy it.

Try to find a way to report these items, either to Linden Lab by flagging the listing or to the original creator of the items.


That among her suggestions is not using Marketplace to purchase these items, Hamlet Au, who also wrote about the issue, called this, "Ironic, because a key point of the Marketplace existing at all is it makes online shopping for virtual content much more convenient than having to go rooting around for items in the full 3D client." Hamlet would go on to say Strawberry felt Linden Lab's options for dealing with this problem were limited.

"I honestly don't think they can because for them it would be hard to tell who is a valid seller without someone informing them at first and that's why the DMCA needs to happen." She was quoted as telling Hamlet, "If they went around closing accounts of people they suspect might be doing this without someone claiming it first, then they could potentially close some innocent accounts."

One possible solution, Strawberry suggested, was closing the accounts of those DMCAs had been filed against. But the Lab would need to be careful about unfairly shutting down creators whom are the target of false reports. Doing to would take time and resources (and money)by the Lab. But as Hamlet put it, "doing that would cut into Second Life's steadily shrinking profit margin. Then again, alienating content creators by not giving them a secure market also is also a profit-limiting move."

Among those leaving comments after Hamlet's article, one resident compared the problem to selling real life goods if they were easily duplicated in a fast-operating and extremely cheap to operate 3D printer. The person felt if someone was selling something completely Full Perm, rather than copyable but not transferable or transferable but not copyable, the seller was taking a chance, except perhaps if such items were useful only as parts to make a more detailed good.