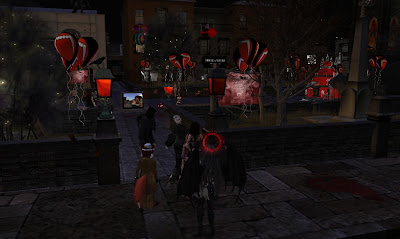 Friday August 12 was the twelfth anniversary of the Transylvania sim. Parties had been going on all week, but Friday was the big day, or rather the big night. Residents or all sorts came by, vampires, weres, and normal humans in both dark outfits and regular clothes. Hopefully the latter brought plenty of garlic. 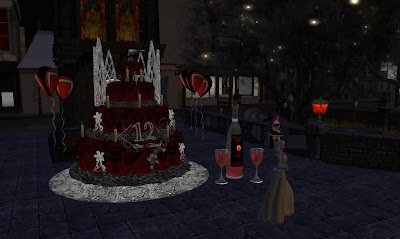 There was a birthday cake in the own square, as well as a number of fang emblem balloons for the anniversary, or the "fangsgiving" as someone called it. While there were plenty of vampires, there were no sightings of vampire bats, this time. Not one tried to give this fox reporter a hickey. 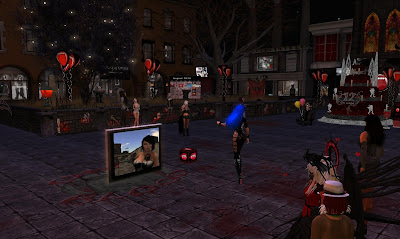 Vampire fans have been a part of Second Life for most of it's history. They do have an iffy reputation among some due to the "Bloodlines" game, but the vampires themselves look down on those who abuse it, calling them "leeches." While Transylvania is not the only vamp area, it is the oldest and best known one.

The real Transylvania had no vampires of course, though it is noted for Gothic architecture. It should be noted that Vlad Tepes, the inspiration for the character Count Dracula, was not from Transylvania, but what is now southern Romania. Perhaps Transylvania sounded spookier than Wallachia. But the name of the place has become so linked to vampires, no one is trying to "suck" the fun from fans of the undead.