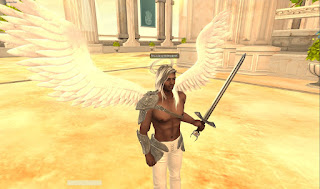 After the new starter avatars were announced a few days ago, I'd heard a few complaints about them, and finally someone asked me if I'd given them a try. Not seeing them available in my viewer, I went ahead and created an alt and started out with one, the male "angel."

In my up to date Firestorm viewer, which is designed to see Bento avatars and attachments for, the avatar looked pretty detailed, and the wings gently flapped. But there was one small flaw, at least in my opinion. The avatar was shown sword in hand. It would have probably be better for the sword to have been in a scabbard on his belt as presumably it would be mostly in social situations chatting with others, and a newcomer would take a while to learn how to remove it. 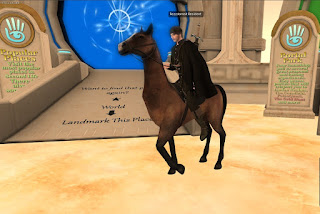 Two of the avatars, a female and a male (shown here), were horseback riders. Not only did the avatar come with a horse, when switching over to it the rider was on the horse. The horse was quite detailed, and moved around a little at rest, and when walking or running, the animation kept up. It would be good for someone heading straight to a horseback riding sim or a fantasy roleplaying area that was mostly forest land. That is, if the newcomer knew where to get to such places. The problem with the newcomer arriving on horseback is he's not going to know how to remove his horse for a while, which may make interaction with others indoors a little awkward at times. 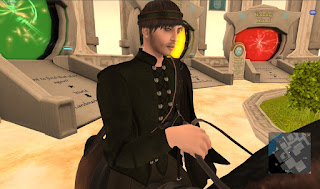 Gentle Heron mentioned one other complication with the horseback riding starting avatars, one that in my opinion Linden Lab couldn't be blamed for not anticipating. It seems at least one resident was staying clear of these avatars due to a phobia caused by a traumatic experience with one of these huge animals with powerful legs. And since a newcomer couldn't be expected to know how to remove the critter, he wouldn't know how to remove the source of fear of someone with a similar phobia.

As many weapons in Second Life are designed to be sheathed or drawn with either a code word, or a gesture that can be made with the press of a button, perhaps something similar could be done in the case of the weapon and the horse. But how to make it simple for newcomers, and getting this information to them?

And of course if a newcomer in  Bento avatar comes across people in older viewers, the features that were improved on new viewers are going to come out a mess. Since you don't know what viewers others have, when arriving at an event in a shinny new Bento avatar, you may need to ask everyone of they can see it okay.

After playing around for a while, I sent the alt to Curious to get the freebie furry Felis avatar there before calling it a night.