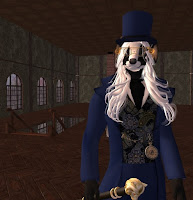 If you're looking for some Victorian/Steampunk wear, one place you should check out is Zan's in Steelhead Bay. Owned by Zantyago Mannonen, I went to check the store out. He has many good clothes both from the Victorian era and from other times that take the fashion as a frame of reference.  I would recommend this store to anyone who is interested in Victorian wear.

I had a few words with Zantyago. "Steelhead was looking for tenants, and I was looking for a place to set up a big shop," he told me about the store. He previously had a location in the old Steelhead Estates. He couldn't remember where he started, but Zan's really took off after he released his first male suit.  Zantyago was amazed by the response and that particular suit is still a strong seller. Zantyago then shaped and combined dresses he had already created to make new stuff.  The Blazer Belle is a great example.  That one is popular. 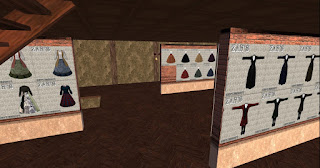 "I began doing this more seriously because I lost my real-life job and  I had the realization that I'm not cut up for office nonsense," said Zantyago, ."I am still studying chemistry which is my career and I had some great people that helped me and encouraged me." He then brought up the group, "Iron Sharpens Iron, which is a group of skilled people."  When asked about the Iron Sharpens Iron, he said, "Surrounding yourself with skilled people and show your works, and most important, listen to what they have to say." Zantyago explained that the group mostly disbanded, but those aviation people were great help, and good crazy fun. 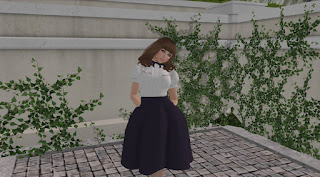 Zantyago makes Victorian and occasionally clothing from other eras that take the Victorian era as a frame of reference. There are outfits for both men and women, coming in both mesh and prim. He sells to both owners of furry and human avatars, and has a line of shoes made for furs. He has a cute set with color changing abilities. Zantyago went on to say that there are clothes in pastel colors coming soon. Another excellent outfit is a collaborative effort with Amy Parker Tapkoinu Resident, "Zan's Little Lady Dress."

I would recommend this store to anyone who is interested in Victorian clothes.

Deaflegacy
Posted by Bixyl Shuftan at 6:05 AM