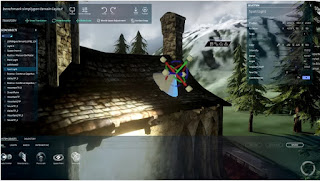 This Sansar preview video came just after the "Ria" one on July 6. Done by Linden Lab with help from Draxtor Despress on July 12, "Opening to the public in 2017, Sansar is the best way to create, share, and sell your own social VR experiences. You can apply to join our creator preview community now at Sansar.com. 3D content and environmental artist Maxwell Graf shares his thoughts creating 'Neptune's Revenge' and other roleplaying experiences with Sansar."

The video shows Maxwell creating two scenes meant for roleplaying, "Rustica" and "Neptune's Revenge." He talks about how useful a platform could be for roleplaying, saying the area is "4096 square meters, it is pushed all the way up to the maximum size limit in Sansar. The really interesting thing about something on that scale is it does not have to be confined to a small village anymore. You can exist on each side of the mountains, and never even  see each other because it takes like three hours to walk across." With some flak from Second Life users about reports of Sansar's sims being separate rather than the ability to connect to one another, that places in Sansar can be this size is likely to be positive news. He also talks some about the possibilities of builders in Sansar marketing their content.

Hamlet Au and Inara Pey would also write about the video. Inara's article is the more positive of the two, she admitting she's known Maxwell for some time. The Newser did write about him in July 2010, when he deleted a sim to protest content theft in Second Life.