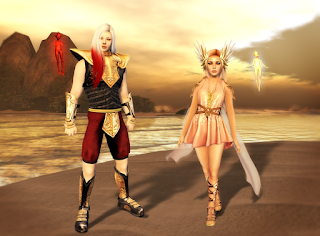 Yesterday on the official Second Life Blog, Linden Lab announced that they were making available eight new starter avatars. These are male and female in four categories: "Renaissance, Mystic Heroes and Angels & Demons." Six of these avatars are different as they are described as "Bento-equipped."


... we’re excited to announce a set of 8 new starter avatars which are themed Renaissance, Mystic Heroes and Angels & Demons. In this release, for the first time ever, we’re offering Bento avatars! Yes you heard it right, all but the Mystic Heroes in this offering will be Bento-equipped. Some of the avatars are ride-alongs, which mean they include horses as a Bento attachment, while others boast animated wings!

For now, these avatars are available only in the official viewer, which presumably has updated already. Firestorm and some other viewers are likely to follow soon.

What do you the readers think of these new starter avatars? Are you impressed by the use of Bento in them?

Source: secondlife.com
Posted by Bixyl Shuftan at 6:04 AM