Today Last Day Up For the Relay Sims 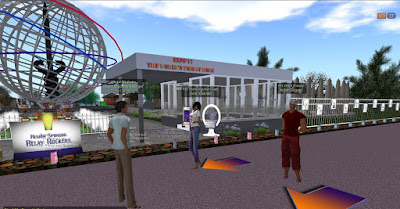 With the time until the Relay sims come down getting closer, many were taking some time, even if it was brief, to give then another look. I happened to catch this meetup between Trader Whiplash, Gem Sunkiller, and Aryon Dagger. 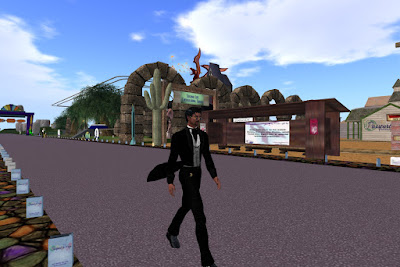 Fuzzball Ortega was also giving the track a look. As far as yours truly knows, he walked most of the way. Though word has it he was in a go-cart part of the way.

Among the people I ran into was Nancy Clowes, the head of the "Fun Rides and Amusement Parks" group. She introduced me to Pryda Parx, the producer of the Future Shock machinima series. 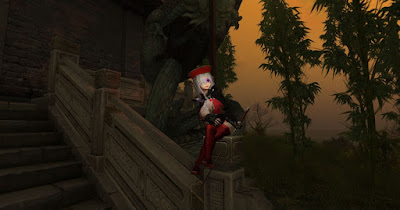 Valkyrie Ice found an Asian-themed build at RFL Journey. Since she couldn't take it with her, she took a number of picturesque screenshots with her in a Chinese outfit.

There were two announcements in the Relay groups today. One was the time for the "Flood Party, " which was scheduled to be between 5PM and 7PM somewhere in the Relay sims.

Location TBA on Wednesday
Join us one last time for a Farewell party to the Relay Sim.
Dance, party and share your relay memories!

Bring your inner tube to put on and wear your water proof clothes....just sayin.

The other announcement was a sadder one, that after Wednesday, the event would be coming to a close.

Sadly the Relay Sims need to be returned. Campsite clean up must be done by Thursday June 21  11pm slt. We are not responsible for any no copy items left on the sims after that time.

Please try to leave the campsites /builds up until Wednesday night or Thursday if you can, as ppl are still visiting.

For those who want to see lots of screenshots of the Relay Weekend, there is the Relay for Life in Second Life Flickr page. Among the top contributors, Wildstar Beaumont, and IshtarAngel Micheline (Ishtarkiss)