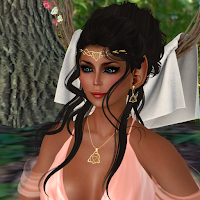 Deaflegacy recently interviewed one veteran Relayer whom has become a familiar face in the Relay for Life of Second Life: Gem Sunkiller. Part of Team Shadow, Gem was part of the team's successful efforts this season, raising almost 1,800,000 Linden dollars and earning Topaz rank in fundraising. In the interview, Gem talks about she became part of the Relay, her team's most successful event in her opinion, and more.

Read Deaflegacy's interview in People.
Posted by Bixyl Shuftan at 6:04 AM