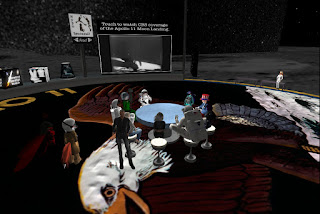 Thursday July 20 was the 48th anniversary of the Apollo 11 Moon Landing. In Second Life, the occasion was celebrated with an event at their Tranquility Base venue at the National Space Society sim. Although this was an all-day event, there were two important times, 1PM and 7:30PM SL time. It was 1:18PM SL time on the date in 1969 that the "Eagle" lander touched down. I was among those there watching a video of CBS news footage at the time of the lander making it's approach and finally coming down. 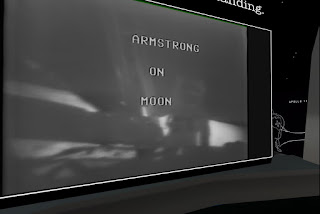 Some couldn't help but cheer at hearing the famous words, "Tranquility Base here, the Eagle has landed." "Woooooooo!!! 'Man on the Moon.' " "Congratulations, Team Apollo! Yay!" "Truly an amazing feat." A few people recalled watching the event on TV at the time, " I had enough time between landing and First Step, I could watch the landing at my in-law's house in Cincinnati Ohio then drive to our college apartment in Lafayette Indiana (between Indianapolis and Chicago) and arrive in time to watch the First Step. Better believe I had my fingers crossed; nothing would stop that car!"

There was more discussion, "Walter Cronkite actually teared up. Experienced newsman than he was, it still got to him." "Imagine the pressure on Armstrong. Christopher Columbus could revise his wording all the way back to Spain. Armstrong was 'live' with an audience estimated in the billions. Most-watched-show ever at the time." "They mention Neil in his heavy spacesuit only sank about 1/8" into the lunar dust. By then they knew he was in no danger of falling into a deep pool of dust, as some had theorized, due to the earlier Surveyer landers giving them, literally, 'ground truth'." 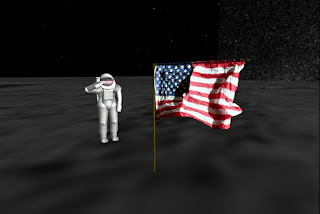 Talk soon turned to, "So when do you think we'll be back?" Despite NASA's grand success, public support for additional Moon flights dropped, and eventually so did the space program's budget. The last Moon landing would be on December 1972. Currently, the United States has no means of it's own to send men into space, let alone to the Moon. Perhaps China or some other country announcing it was launching a Moon program would spur America to return there. Or perhaps it would be a private space program. But there was little doubt among the people that it wasn't a question of "if" we'd be back, but when.

There would be another gathering at 7:30PM SL time to commemorate the first steps on the Moon at 7:56PM.