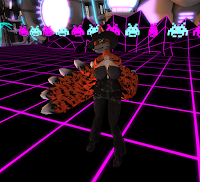 This is the last week for the Relay for Life's Team Sunbeamer's Bid Me events. "Bid Me Mouse," "Bid Me Bunny," and "Bid Me Purple" have been joined by a fourth volunteer: Matt Carlton. In "Bid Me Feral," the country music DJ is offering to go about on four legs for a little while as a multi-tailed feral kitsune fox.

Like the others, there are two kiosks, a default one for those whom would rather stay her current looks, and another for those whom would like to see her quadraped for a while. For every 2500 (no fractions) in the change kiosk, she has to go through a week of two left feet jokes. 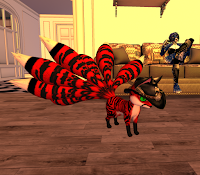 All three events will go on until Saturday March 21 at 8PM, at the close of the party at Cutlass that night. The fundraising totals will then be final, and how much time each volunteer has to stay in their new look will be decided.

As of the writing of this article, all four Bid Me events had raised almost 40,000 Linden dollars. The team total for his season is almost 218,000 Lindens.