News and Commentary : Looking Back at Torley Linden

If you were a resident in Second Life from 2007 to 2010, Torley was one of the Lindens you heard about the most, if not the Linden you knew about the most. He was the Linden who did various videos for Second Life residents, both tutorials with basic information and tips for more experienced residents. They often started with the cheerful opener "friendly greetings," which became an unofficial trademark of his. So was his going about in bright green and pink avatars, his "watermelon" look.


When interviewed by Saffia Widdershins in 2016, Torley stated he joined Second Life in 2004, "I was in a really hard place in my first life, and I discovered Second Life through various sources ... and I was reading a lot of cyberpunk and transhumanist literature at the time, thinking about a brighter future for my whole life. And I soon found myself – well, there’s no nicer way to put it than I was utterly obsessed with being here every day." After several months, "I basically sent this crazy,  rambling note card to Char linden at the time." She and a few other Lindens "gave me the opportunity to apply. So I went through that. Guess it turned out OK."

Torley would say of his time in Second Life, "I’ve mostly been a nomad explorer. I have had homes, and I have had full regions. I still do in fact. But I think the prime thing that always drives me is really the force of discovery, and to share those discoveries, and I really get curious, and I love asking people 'where did you get your avatar?' or 'did you make these parts of your avatar?' or comment on a cool build they’re making. And finding the connections. I love introducing wonderful creative minds in Second Life to each other, and we’ve had so many over time."

Torley would make his Tips and Tricks videos from 2006 to 2009. They can still be found on his Youtube channel. In February 2010, he would announce there would be new Second Life tutorial videos on their own channel. He would do a few of these newer tutorials, which were not as numerous as the ones he did before. He would explain in the 2016 interview there had been a "shift in focus" at the Lab for him to promote newer features and his time was more limited, "I wish I could clone myself." He did feel that numerous bloggers had helped fill the role he had earlier. 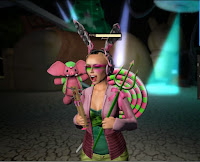 Despite no more of his "friendly greetings" videos, Torely was still around. He would appear at events such as Burn2 and the Linden Snowball fights, either as a Linden or in a "civilian" avatar. And he would appear at the Second Life Birthday as well. Although obviously male in real life, his avatars were often female. He would also post thousands of screenshots on his Flickr page.

In 2017, he would be among the Lindens moved to the Sansar team. There he would remain until last month February 2020, about the time of the layoffs in which the next generation virtual world's staff was reduced to a skeleton crew.

Exactly why Torley was apparently let go, one can only speculate. His old position on the Second Life staff had long been filled by others, but he could have been given a position in public relations, which the also popular Xiola Linden left after stepping down from in January with her leaving Linden Lab. Perhaps he wasn't dismissed, but like Xiola decided it was time to move on. But this is all speculation. Linden Lab isn't talking and neither, at least for now, is Torley.

In any event, the "watermelon man" will remain a part of Second Life history. Whereever he goes, we at the Newser wish him well.