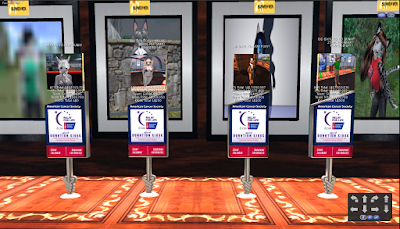 Team Sunbeamers may be a top-ranked team in the Relay for Life. But it's not going to just sit back and coast. The team has started up two "Bid Me" events to raise some Lindens: "Bid Me Mouse" and "Bid Me Bunny." 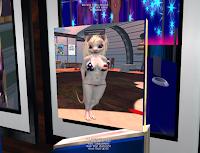 Based on the "Bid Me Bald" events started by Trader Whiplash, in these cases two people known for going about in nonhuman avatars most of the time are putting their looks on the line. For each of the events, there is a pair of kiosks. If you want the person to remain what they look like, put your Lindens in the one on the left. To make the volunteer look different for a while, put your cash in the right kiosk. If the right kiosk is higher when the totals are counted, the person goes about in the appearance for a period of time. 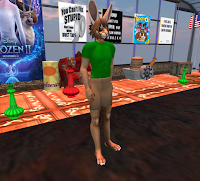 For "Bid Me Bunny," it's Sunbeamer team member and Newser editor Bixyl Shuftan (yours truly) whose appearance is on the line. For every 2500 raised in the right kiosk, I end up with long ears and a cottontail for a week, rounded up. If 4999 Linden dollars are placed in the kiosk, I only need to spend one week as a bun. If 5000 Linden dollars are in the kiosk, it's "What's up doc" jokes for two weeks. Once again, if the bunny kiosk is higher than the one to keep me foxy.

The possible "out" for me is when I'm doing something obvious for the Newser, notably doing an interview. As for my tradition of the "Platinum Avatar Challenge," I'll make a bunny look part of it should the team reach Platinum while the "Bid Me" period is going on.

The kiosks are in the back of Club Cutlass. So come on over and bid us a different look. Just don't expect Rita to make appearances in Orlando Florida or me to dye myself pink and bang on a drum.