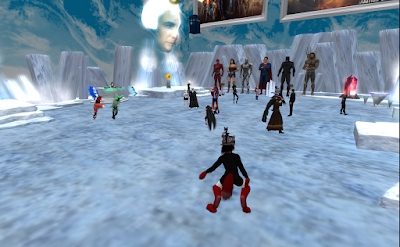 On Saturday Night, February 29, Caledon Oxbridge University held a fundraising party. This wasn't at the University grounds, but high above the sim in a place that looked like it was carved out of ice: Club Jor-El. Cynthia Farshore was the DJ for the event. Instead of taking tips, there was a donation jar "to help support classes, tutorials, and tier" of the institution. "Don't crack the ice," she mused.

Among the songs played were various superhero movie themes, and a few cartoon ones. There was also some chatter about these movies and cartoons, as well as some talk about science fiction, such as the Star Trek Animated Series and the Starfleet Battles board game, which featured a race from the Trek cartoon, the Kzinti, which had the carriers in the game.

Near the end, Andrea Jones (andreajonesms Resident) announced, "This will be the last fundraiser ball for a few months. I think I'm overdoiing them. ... Club Jor-El will be a permanent build. It's too cool to close early." "Even if it is crawling with superheroes?" one guy in a villain costume mused. "I have rebuilt it twice now ... Well, you can't find a villain build." Someone mused that was probably because villains' lairs tended to blow up after the heroes beat the bad guy.