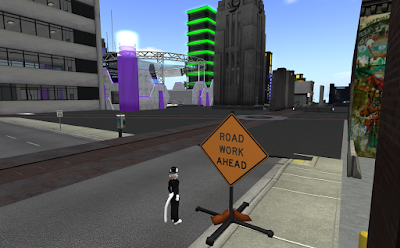 Before the Newser closes out our reporting on the month of March, yours truly decided to take a look at our sponsor Montecito Bay. When we last looked at the place in February, some more property had been bought up by a previously unheard of company. The locals hadn't been saying much to begin with, and had been saying little since. So I took a trip over.

The place has been greatly changed from the look it had in it's beginnings. The look of a coastal city in the American southeast in the fifties has given way in places to more futuristic-looking buildings. The Sandbox area no longer looks like a baseball diamond, but an arena for some different kind of sport (and has a billboard to aid in newcomers wanting to learn how to build with prims).

There are some places I hadn't seen before, such as the Wasa Bay sushi bar near the beach. Deeper in the town is the Flying Pickle Food Festival. And with the change having started with stories by an entity named Azucar, there's a tall office building with the Azucar logo. No information is yet available on who they are, or who owns it.

But some places are still around. The beach area is still around, although it's boardwalk is still being worked on. The Avagora Mall has been getting some new shops lately. Becky Nosferatu told me they plan to have, "a ton of stores that will be open by the end of next month." Clubs like the Flying Pickle Lounge and Studio 86 are still around. Dropping by the latter, when I brought up the subject of the changes, not much was spoken, one local commenting, "I'm just glad that they haven't snapped up that lovely Taco Crux restaurant."

The town is still in the middle of renovations with some places obviously halfway finished and some loose prims here and there. Stay tuned for more information.

Posted by Bixyl Shuftan at 4:35 PM