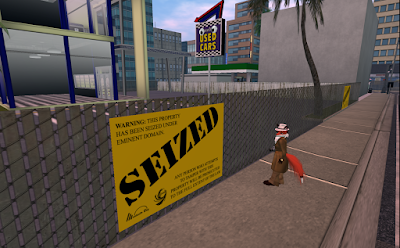 It's been about a month since the discount motel in the eastern part of Montecito Bay was seized by the mysterious Azucar entity under eminent domain laws. While there's no new information on who or what Azucar is, another property has come under their ownership. This time it's the Quality Used Cars lot on Palm Street. The cars are all gone and the building cleared out. There's not a great deal left besides the business sign and the "googly eyes" glued on it.

The car lot and the motel may be coming down soon. On another street, I saw a bulldozer and a excavator (or steam shovel/power shovel) parked next to one another. So it seems the razzing of one or both buildings can begin most any time.

For the most part, the seizure of the two places doesn't appear to have affected life in the community. Dropping by a club over the weekend, the people were talking about a furry wrestling league, not Azucar. Then again, used car salesmen don't exactly have the best of reputations. There was one place however that was making an slight extra effort to show others they were still in business. The S-Mart Express convenience store at the corner of Venetia Blvd. and Palm Street, which is near both the car lot and the motel, put up a sign, "I assure you we're open." The sign was hastily-painted words on a cloth. Although the place looked well-stocked, there was no clerk on duty when I stopped by. Maybe the worker was taking a bathroom break, but outside the store trash was piling up.

So will Montecito Bay soon be minus a motel and car lot? Will there soon be a "Rumble in the Bay" as furry wrestling comes to the community? Stay tuned for more information.

The preceding was written as a "fun article" for Montecito Bay