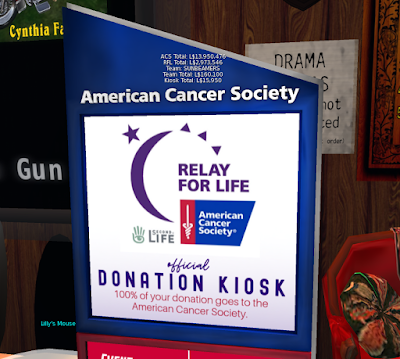 Team Sunbeamers had been saving up all winter to get an early start in the Relay season, and in December had raised enough for Gold level fundraising. But when the kiosks were first delivered, the Lindens were loaded into it too early by mistake. But thanks to a little help, the team was given the proper credit for the donated money. Since the minor incident, almost 16,000 was raised and added to the kiosk as well, for a total of 160,000 Linden dollars. This isn't too far from Platinum. So yours truly will likely be going through his "Platinum Avatar Challenge" soon.

Expect a "Bid Me" event or two soon.  And not far from now, the Sunbeamer Air Show.