"The Outsiders" At The Bob Hope Theater 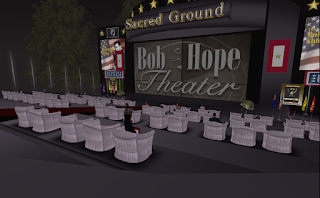 On Tuesday February 4, the Bob Hope Theater was the scene of a performance by "The Outsiders." The event was to celebrate the anniversary of the USO.

The Outsiders Dance Troupe salutes the USO and BOB HOPE !
Starting at 6pm The Outsiders kick off a new season with our HAPPY BIRTHDAY USO SHOW and a tribute to BOB HOPE.HONORING Freedom and the American Way through powerful Dance , Music and it's Moods! Today and Everyday we Honor our Vets, active duty and first responders protecting  the free world.

When interviewed about the theater last month, Paul Woodrunner had this to say about the group, "The Outsiders are about vets and bringing about an awareness of veterans, and sometimes their needs. It is about heroes mainly. The Outsiders are the dance troupe that calls Bob Hope Theater home. We are all about first responders  veterans active duty military." 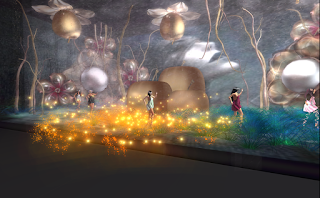 The USO (full name United Service Organizations) is not part of the military or connected to the US Government, but a "nonprofit-charitable corporation that provides live entertainment, such as comedians, actors and musicians, social facilities, and other programs to members of the United States Armed Forces and their families." It was formed on February 4 1941 by Mary Ingraham after a request from President Franklin Roosevelt, bringing together six organizations to help, the Salvation Army, the YMCA, the Young Women's Christian Association, the National Catholic Community Service, the National Travelers Aid Association and the National Jewish Welfare Board. The idea was "The government was to build the buildings, and the USO was to raise private funds to carry out its main mission: boosting the morale of the military." Although the organization is best known for it's work in World War Two, it has continued to provide entertainment for US servicemen since, including in the Afghanistan and Iraq campaigns. 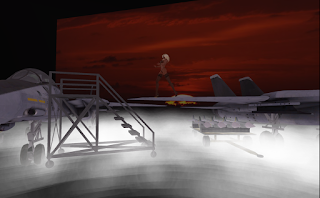 The February 4 show was given in a packed sim, with 59 avatars in the area. Over the next hour, there were several performances on stage. One had one single dancer, Allyson Solo, dancing to "Take My Breath Away" on a couple fighter plane wings. "Let's show some respect here people," one man called out, "Ally has worked very hard to bring you folks her best effort here."

While some of the women on stage might have had revealing outfits, there was also one group of men, led by Antonia (Murhdur) showing some chests to the ladies in the audience, "Oh yeah, Now that's some Sweet Eye Candy!"

Each performance on stage was met with hearty applause from the audience. "Great show-- and great tribute, All!" "Thank you all for coming and joining us tonight!" "Thank you Paul and group!"

The next show planned is for Monday March 30, "Welcome Home Vietnam Veterans Day."