News And Commentary: No Plans For Covering US Election in SL This Spring 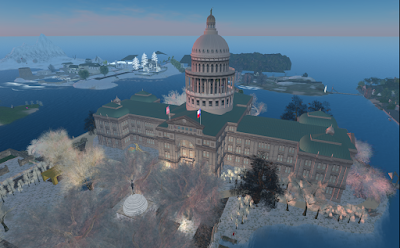 Over the past few days, there's been quite a bit of chatter on my social media in Facebook at Discord about certain political issues, notably the unsuccessful impeachment of US President Donald Trump. But there were also comments about President Trump's State of the Union Address and House Speaker Nancy Pelosi's reaction to it. While results of the vote itself were more or less as expected, there was still no shortage of angry comments. There were both people expressing their fury at the President and those who voted for him, and the President's opposition and those who voted for them.

Like Election Night 2016, I ended up reflecting for some time at the Texas State Capitol Building in Antiquity Texas (153/132/22), the closest Second Life has to Capitol Hill. While I had thought of covering the election some this spring, the frequency and depth of the anger I've been hearing has convinced me to wait a little longer. There's plenty else to write about in the meantime.

Perhaps a little time will help calm the angry voices ... hopefully. As a reader of American history, I am all too aware of what can happen when there is no longer an agreement to disagree.