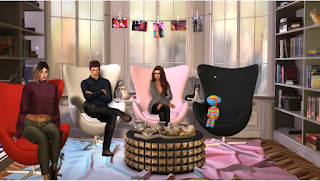 On the Lab Gab last Friday, February 21, there were a number of announcements, including Linden Lab looking to either sell Sansar or find a partner to help keep it going. Another subject discussed was last names. The details about the last names contest were announced by Keira Linden , the Product Manager of the Name Change Project.

"So I got to go through all of the lovely submissions everbody sent in," she told, "There were some awesomly creative names in there, a lot that we can use, some that we cannot." She stated there were over 2400 submissions, "So it took a while to gather all those names and if you can suggest up to three names per submission, that's a lot of names."

"But I have managed to narrow it down to eight names." She then listed them in alphabetical order.

While the contest called for five names, "I had a really difficult time narrowing those down ... so I went over a little bit." These names will not be the only surnames available when the Lab starts giving the residents the option to change their names, but there will be more. The winners were notified via email, and will be getting a free name change when the process becomes available.

Keira stated she couldn't give a date yet on when residents will be able to have their account name changed, "It's such a huge project. It touches every deep dark dusty corner of Second Life, and we've had to get in there and explore how name changes is going to affect pretty much every aspect of Second Life. ... We want to make sure it goes out in good condition." She stated one reason one reason she couldn't give a date was because once the project gets turned over to the Q and A team, "they're going to find some stuff that we missed along the way. So I can't give you a solid date."

In November, Linden Lab had stated residents would be able to change names at the end of January.