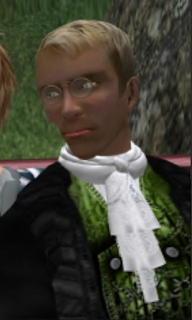 Some good news for the residents, and fans, of the Mieville steampunk community. For several weeks, the people there have been worried about their landowner, Perryn Peterson, after he checked into a hospital and not a word was heard from him since. That is, until earlier today, when a resident spotted him online. Miss Mattie Puss (MatildaRigby Resident) would describe the encounter.

[11:29] Perryn Peterson wabes to da Kitteh hoping not to frighten her half to death.
[11:32] Perryn Peterson: I is back.  Sort of.  Not in the best of health but back.  You won't believe all that happened.  I hope to see you soonly.

HE HAS RETURNED! HE LOGGED IN FOR A SHORT TIME AND LEFT MESSAGES. HOPEFULLY HE WILL COME BACK LATER BUT HE WAS HERE!

Mieville chat was promptly full of comments, "Linden Labs prob called him up and said you know you got these people panicing and they wont leave us alone." "It's a Valentine miracle.  I can't wait to hear what happened.  Soooooooo relieved.  Wonderful news." Miss Mattie would add, "He left me a message and I cussed him. I love him and wanna smack him for being gone. ... hope he comes back on tonight so I can hug hims and bite hims for being gone and hugs him again."

Talking to Assistant Mayor Wyvern Dryke (Wyvvy), he told me couldn't give me 100% confirmation the emergency was over, but "It's safe to assume he's paying his tier.  I don't think you would be going out on a limb for saying that."

So it would seem Mieville's crisis is coming to a close.