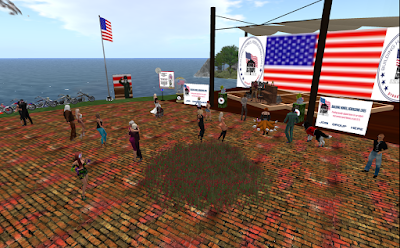 On Sunday February 23, Veterans Isle held it's monthly benefit concert. The event, which raises money for the Homes For Our Troops charity, was organized in party by Frets Nirvana.

Tonight we are conducting our February Homes for Our Troops benefit and we once again have an excellent lineup.

DJ Waya Snowpaw started things up at 4PM SL time. At 5PM, it was Aby Jaidoy turn to perform for the crowd. Dimivan Ludwig took to the stage at 6PM. Wolfie Starfire sang away at 7PM. And covering the final hour was ReggieSunset Rookswood at 8 PM SL time.

Dropping by Dimivan's set, the crowd cheered for him, "YAY DIMI!" "So beautiful Dimi!!" "I love this song so much." "Great version of this Dimi!" But they also kidded him around a little, "Dimi had some free time in the bathroom before the show to do some reading." And sometimes kidding one another, "Laurie I didn't know you were singing with Dimi?" One song got someone wondering whom originally sang it, "Bob Seger? Or Kid Rock? Eminem?" "Could you imagine Dimi singing an Eminem song? (laughter)"

Donations were made in two house-shaped kiosks on either side of the stage. On occasion, Frets would make offers to get people to donate more, "34450 right now in those kiosks.  Let's get it to 40k. I will put in another 2500 Lindens." He would also remind people of the reason for the event, "We need to be thanking our vets for what they have done, major sacrifice!" "Folks, we sent $14000 to Homes For Our Troops last year. We are really trying to beat that number in 2020. Gonna take a big Second Life effort!!  Thank you for helping. To learn more about Home For Our Troops visit www.hfotusa.org ."

At the end, a total of 145,025 Linden dollars had been raised for the charity.

Veterans Isle usually has it's monthly concert on the last Sunday every month, though there are occasional exceptions such as Memorial Day Weekend.