Yesterday on the Linden Blog was the first of this year's "Love Made in Second Life" stories, "Meet Adam and Ruby."

Meet Adam and Ruby - two Residents who met four years ago at the Sexy Brits club in Knightsbridge within the London Sim in Second Life. Strangely enough, it was a song request that brought them together! At the club, Ruby noticed that one of her favorite songs “Crucify My Love” by X-Japan had been requested -- so she had to find out who was behind it. 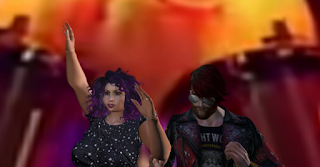 When told it was Adam, she was surprised as she had assumed that his avatar was just a bot. So, she reached out to him in chat.

“I thought it wasn’t really a person because he was dancing in the same corner all the time,” says Ruby. “I absolutely thought he was a bot!... I never would have started talking to him if it wasn’t for that song.”

Read the rest of the story Here.
Posted by Bixyl Shuftan at 6:02 AM