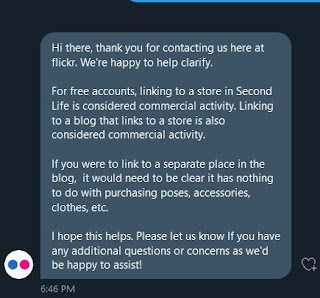 According to an article in New World Notes, those whom use screenshots stored on Flickr to promote their Second Life business will have to upgrade their accounts to "Pro" if they haven't already. When Hayden Pierce asked if using pictures from the virtual world applied to it's rules concerning commercial activity and free accounts, he got the following answer.

If you were to link to a separate place in the blog, it would need to be clear it has nothing to do with purchasing poses, accessories, clothes, etc.

Why is Flickr forcing free users whom use their service to help advertise their wares to get Pro accounts? It seems they've been having some financial difficulties. In December, they were pleading for more users to upgrade their accounts. "We cannot continue to operate it at a loss as we’ve been doing." So it appears the move is to get more cash from it's Second Life users.

The responses to Hamlet Au's article were mostly accepting or supportive of Flickr's move. One commented, "it is only a clarification to all the folks who ignored Flickr's rules on commercial activity. It has been forbidden a while by now and many SL users ignored it. Can't say I am surprised they decided to take action." Another thought clever Second Life business owners might write it off on their taxes as an "advertising expense."

So it seems for Second Life business owners who use Flickr, it's go Pro or go home.