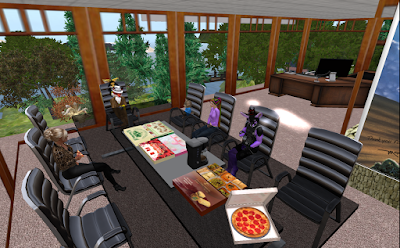 Last Saturday, February 1, the Newser crew held a staff meeting at our office in HV Community to swap ideas for events. Attending from left to right were Gemma Cleanstlate, Bixyl Shuftan (myself), Penny (Deaflegacy), new reporter Angel Fencer (Ender Leven), and Cyfir (Cyfiremmerich Resident). My friend Velani was also there.

January was a month that allowed us a slight breather after the Christmas season, which allowed us to write about things such as "Top Stories of the 2010s" and "Bus Tour Across Second Life." February has always been a bit more active with Valentines Day, then One Billion Rising. But with the start of the Relay for Life fundraising season moved up from March to February, well, it makes things interesting.