Mieville in Trouble Due To Missing Landowner

The Mieville steampunk community is facing a crisis: the disappearance of the landowner, Perryn Peterson. After a tip, I joined the community group, and in a notice from February 3, read the following.

As many people know Mieville is facing a challenge. Our beloved Mayor went into hospital at the end of December and has not returned. There is a lot of uncertainty about how we should respond but some careful evaluation of where we are right now may help us plan what to do if the unthinkable has happened.

The rest of the notice talked about coming up with a plan about what to do. A later notice discussed about talking about the situation with a Linden.

I ended up contacting Wyvern Dryke, also known as Wyvvy. "Perryn is on extended medical leave," he told me, " Other than that, we have no news.  He left for the hospital on Dec. 28, 2019. He was sick with a severe flu for six weeks prior. We never heard anything after he went to hospital.  For all we know, he's in some rehab center on a drip tube. No one, including his partner, has any RL information to contact him." 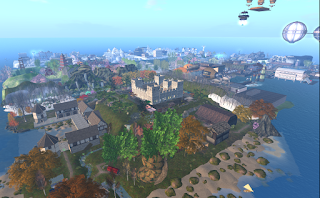 So what are the people doing? Wyvern told me they were in the middle of making a backup plan. How much time did they have and how much slack would Linden Lab give them? "We have no idea how much time. LL won't tell us. But they said they'd be wiling to 'work with us' once the rent dries up. In the meantime I am keeping everything going forward like it was before: all events, Social Night, feeshing, etc." While some residents had left the estate grounds, others were staying. The local church was making plans for Ash Wednesday. Wyvern added, "We have Steam Hunt and Steam Expo 2020 opening on March 1. Lasts until March 31. Then in May we have Anxiety Awareness Art Festival." They were still accepting merchants for the Steam Expo, of which info can be found at Mieville Shelley (65/64/1035). 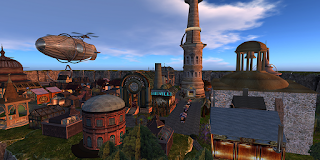 Overall, the mood was optmistic, "Everyone in Mieville is putting forth great effort.  Our meetings on Monday are crowded with concerned citizens willing to discuss Mieville's future.  We all miss Perryn and wish for him to return, but in case he doesn't, we are willing to figure out a new future."