Goings On At The Fairelands 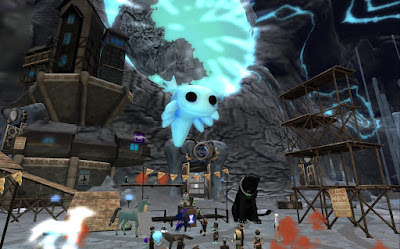 Quite a bit has happened to the Fairelands, much of it deserving of articles all of their own. Among them was this year's Children of Stories' roleplay, "The Sniffer Moles of the Hunros Mine." With Loki Eliot having designed the sim, the roleplay's plot was that a group of child miners of magical energy at an elven mine suddenly found their livelyhood threatened by both the magic growing thin, an unknown saboteur, and the town mayor's response to the thinning magic. After several says of roleplay with numerous twists and turns, events came to a head on Saturday April 30 in an event that raised 1.3 million Lindens, Loki posting a video on Twitter. One can read the roleplay's day by day happenings (here). 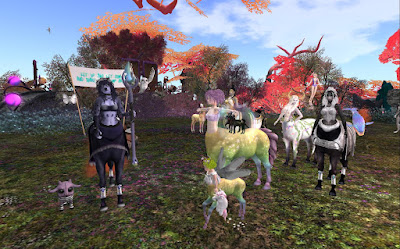 Wednesday May 4 was the Centaur Parade. While the majority of these six-limbed folk were from the Centauria community,  there were others present. In the meet-up before the parade. When they gathered in the Necturn Moon sim before the walk, there were over sixty in the seem. Needless to say, many of my pictures had a considerable amount of gray, and I crashed just before the walk started. 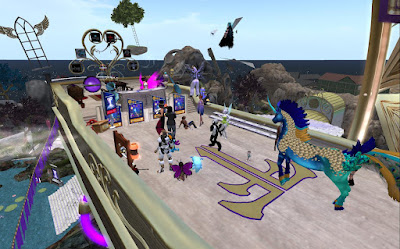 Later on Wednesday from 5 to 7PM, Team Sunbeamer's own DJ Mattie played the tunes at the Fairechylde, the flying boat over the Effervescent Cleffs sim. Mattie played a combination of pop and country tunes. Some of these had some deeper meanings to the Relay such as "Braid Her Hair" and "Clouds."

Also, the second part of the Fairelands Quest is up.

The Fairelands Quest team is so grateful to each of you for your kindness and patience. And we're delighted to tell you that Part 2 is now open.

Two recommendations: First, don't all pile into Clouded Mountains at once :)  Finish what you're doing, maybe do something else, then start part 2. The region will be there. Second, because there's been a delay, you might like to remind yourself where the story left off. You can see the second video by clicking History on your HUD and choosing

That's about it for now from the Fairelands. Sunday May 8 is the last day. After that, the sims disappear into the mists once more.