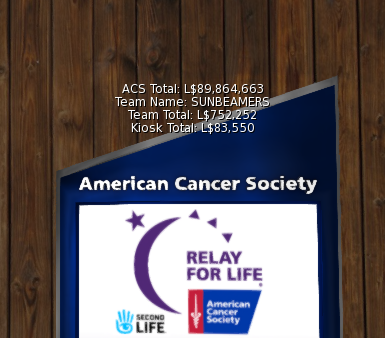 Yesterday was the Relay for Life's Team Sunbeamer's "Medieval Fest" event. The event was fun with rides, archery and axe-throwing competitions, a joust competition (Dusk Griswold won), kissing booths, jail and bails, and a performance by "Roos With A Dream's" DJ Kayla. Plenty of cash was raised. But one huge donation sent things over the 750,000 Linden dollar mark, and into Sapphire rank. 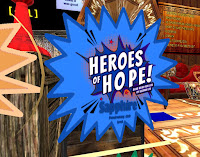 As Alison Flow of the 'Roos put it, This event raised over 100k, shared by two teams. That sounds nice. ... the fair raised 107K for Relay for Life." A little over 90,000 Lindens went to the Sunbeamers. The 17,000 Lindens the 'Roos raised pushed them into Diamond level fundraising.

That night, the Sunbeamers would get their Sapphire badge, which was put on display at Cutlass.

As of now, the Sunbeamers are number 12 of 133 teams. The 'Roos are number six. Fifth is One More Light. Fourth is Cure Chasers. Third is The River of Life. Second is Camping For A Cure. And the top team, and only All-Star ranked one, is The Adult Partnership.