Looking Back: The End of Ozimals 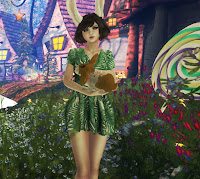 It was five years ago on Wednesday May 17, 2017,  that one of the first breedable pet companies, Ozimals, closed down. They came onto Second Life in 2010. While they were not the first breedable pets in Second Life, they were a breakthrough as they were hardier than the fragile Sion chickens and "the first breedable pet company in Second Life to use a sophisticated system based on dominant and recessive genetics instead of RGB color values as the previous popular breeding pet games." For a time, they were wildly popular, some rare breeds selling for tens of thousands of Lindens at auctions. They even made a marketing deal with Linden Lab.  But the bunny craze soon faded. Shellie Sands thought that the market had become saturated, and when people kept on selling as people wanted to get rid of bunnies they could no longer afford to feed, the price plummeted.

Shortly afterwards, Ozimals filed suit against Amaretto horses, the next popular breedable, saying they had copied sections of their scripts. But after some time, the judge ruled in favor of Amaretto. More breedables entered the market, from dogs to cats and many others. But the Ozimal bunny had a place in Second Life history.

Ozimals continued on, smaller than before, but still going. But behind the scenes trouble was brewing. It seems Ozimals partnered with a "Akimeta Metaverse Development Services" in order to create the scripts for their bunnies, and apparently the partnership for some reason came to an end with no agreement on what Akimeta was owed. What is known is that Malkavyn Eldritch, the owner of Ozimals, posted on their blog that the day before, she had been hit with a "cease and desist" order from a lawyer representing their former partner, and she felt she had no choice to comply. Ozimals was coming to an end as a company.

But it wasn't necessarily the end of the Ozimal bunnies already out there. Malkavyn created for bunny owners "free eternal timepieces and other goodies" that would keep their pets active. Otherwise they would soon go into hibernation without fresh food. Bunnies that were "Everlasting" would go on okay. For a time, the Newser kept a package of these Ozimal goods at the office for anyone who got the news late. There was also a group created, "For the Love of Oz" for fans of the bunnies.

I was recently contacted by an Ozimal fan who asked me some questions about the closing and the goods for preserving and reviving bunnies. So five years later, interest in Ozimals is still out there.