At the VWBPE conference on March 31, Patch Linden talked some about "event regions," high capacity sims that could handle a hundred to a hundred and fifty avatars about as easily as others handled thirty to forty. On Monday May 2, Linden Lab announced they were making these types of sims available, for a price. 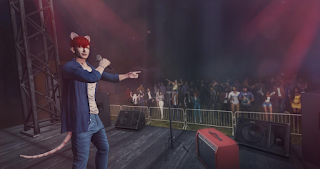 Sporting the latest upgrades in grid technologies that have been enabled by our migration to the cloud, these regions have been tested running large events in real-world scenarios such as those really big monthly shopping events, and live performances! Our tests saw nearly 200 avatars successfully able to shop and party in these regions.

These sims boast " A maximum avatar limit of 175 per Event region," and "Up to 30,000 land impact." It also advertised "Over 20% Improved script performance." This looks very impressive, even though it added that "During performance testing, Linden Lab has identified a few cases where exceeding 20,000 Land Impact will degrade performance with a large number of concurrent visitors."

It should be noted that a regular private island is advertised as allowing "as many as 100 avatars at a time." But anyone familiar with Second Life will know very seldom do this many appear at an event, most sims having a cap at fifty. One's more likely to crash when more people are around, and sometimes even fewer than that can slow someone down unless they alter their Preferences. Does this mean that people will start to have problems after the 85 avatar mark? Even if so, it would be an improvement.

As for the price, the Lab says they're offering "an introductory price of $599, with no additional setup fee through June 6, 2022."

With private sims having a monthly charge of $229 USD and a setup fee of $349 USD, this looks like a bargin. But as one might expect, this good deal won't last. After June 6, the price goes up quite a bit.

Following the introductory pricing, event regions will have a set-up fee of US$999 (includes first month), and a rate of $899/month after the first 30 days.

So these high capacity sims will cost quite a bit. How many will the residents get, and how often? It remains to be seen.