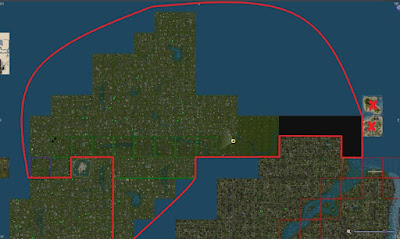 With attention on the latest brand of Linden Homes, the Sakura, the Lindens haven't stopped work on the previous ones, the Newbrooke. We last wrote about them a couple months ago when they opened. Taking a look at the map, the area has been expanded (area circled in red on the map).

When work started on most of these homes is unknown, but looking around the majority in the completed areas have yet to be occupied. Some in a belt extending to the west are still marked SSP and still under construction. I found some in the middle still being worked on. I found Abnor Mole, and other Moles, busy at work, laying roads and foundations.

Of the belt of SSP sims, most had one thing in common: railroad tracks.  From SSP Queeg in the east, tracks went from the developed sim of Lavon to the south to SSPPierless, then west , passing a rail station in SSPDrama Llama (bad omen for the rail workers), going all the way to SSPThimble Shoal Farms to the west. The tracks came to a stop only past the edge of the sims, a hint there's expansion to the west planned for the future.

Linking the roads and rail lines in these new sims to that of the Chalet Linden Home sims to the south, I found a couple bridge tunnels. Both start in the Lost Creek sim and are somewhat close to one another. The rail tunnel goes to the track in Lavon. The road tunnel goes to a lane in Muhavara. There may be more tunnels sometime in the future.

With the Second Life Birthday just a month away, it's fair to say the Moles will be quite busy in the month ahead. In the meantime, feel free to drop by and explore.

(Addition, I goofed on the map a little, and moved the red line to cover more sims that weren't around in March)