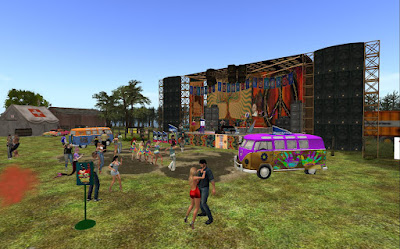 With fewer musicians than Saturday or Sunday, some Relayers might overlook Friday at the Relaystock. But Quartz's performance for team Spirit or the Dragon at 6PM got attention due to a sad turn of events. he had been planing on doing the event in behalf of a friend suffering from cancer. But, her fight against cancer had come to the end no one wanted earlier that day.

[17:21] Darkstone Aeon: I would like to invite you to join me at Relay Stock  - the one event Spirit or the Dragon Relay team is doing this year - @ 6pm Quartz is singing to help raise funds for American Cancer Society -

Quartz would perform for one hour from 6 to 7 PM. As he played his music, people from the audience donated thousands of Lindens to the kiosk on stage. While the Newser didn't get the total team Spirit of the Dragon got that night, it's on the record it was over 11,000 in the middle of the show.

The musicians start up again today at 10:30 AM SL time, including the Sunbeamers' Cynthia Farshore at 3 PM. Sunday at 3PM has DJ Kalya of Roos With a Dream. The last scheduled event later that day at 5PM is the Relay Rockers' Trader Whiplash.