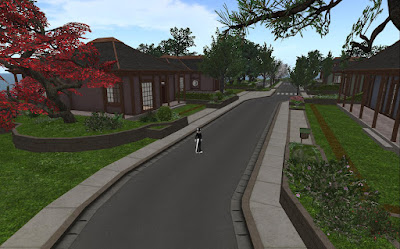 On Monday, the Sakura style of Linden Homes were made available for Premium residents. This meant that the sims where they're located, north of Bellisseria's Stilt Linden Home sims, are now open to the pubic. Patch Linden had an announcement in the forums.

Sakura is our take on a Japanese inspired home theme: a mix of modern architecture that respects classical design concepts. Houses are clustered together in cozy neighborhoods with carefully manicured landscaping befitting of a Japanese motif. Retaining walls provide dramatic terrain height changes, canals, and privacy between parcels. The canal and road network runs throughout the theme winding among volcanic peaks and valleys.

All of the Sakura regions are offered in both 1024sqm and 512sqm sized parcels. Sakura provides 8 beautiful and highly unique house models, and the smaller 512sqm parcel homes can also be placed on a 1024sqm parcel, giving you a larger outdoor garden space. Every Sakura region has public rezzing zones for both cars and small to medium sized watercraft (just mind the numerous bridges please).  As always, we have provided a theme-specific content pack available from the house controller, enabling you to match the style and theme with any modifications you wish to do around your home. Please refer to the covenant rules.

Checking the area for myself,  I found the neighborhoods had not just roads, but rivers and canals as well. Not only were there vehicle rezz zones here and there, but also some boat rezz ones. I would also see numbers of pink-petaled cherry blossom trees. There were also bridges over the water, and in places some water plants. I also came across railroad tracks, a sign the place would somehow soon be connected to the rest of Bellisseria.

As with other recent themed neighborhoods, the Sakura sims have a community center. Located at Shobu (167/128/21), this large structure had an interior pond with plants and koi swimming in it, and numerous tables with cups of tea and plates of sushi. There were also numerous bonsai miniature trees, paper lanterns, and other Japanese-style decor. Around it were stone paths, and plenty of bamboo plants and cherry trees.

Not far north of Shobu is a snow-covered mountain covering four sims. Named Mount Shobi by the Lindens, it's an impressive landscape feature that towers over the neighborhood. Climbing it and maxing one's draw distance, one can see pretty far.

On an amusing note, Linden Lab included a video with the announcement, one showing some funny banter between Magellan Linden and Plunkey Mole and giving Mount Shobi a bit of supposed lore.