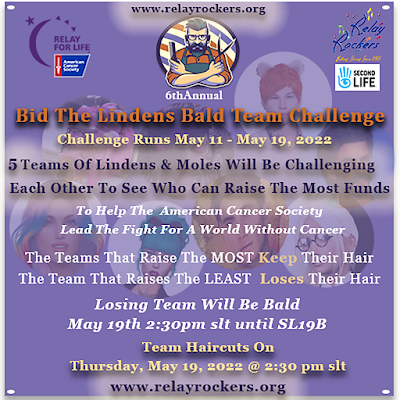 Governor Linden announced today the team lineups for the 6th Annual Bid The Lindens Bald (BTLB) fundraiser, sponsored by the Relay Rockers in support of the Relay For Life of Second Life.  The challenge takes part during RelayStock, the annual weekend gathering of Relay Teams for 3 Days of Peace Music and Hope, to be held May 13, 14 & 15.

Bid The Lindens Bald challenges the different Linden teams to raise as much as possible in support of the American Cancer Society.  The team raising the Most Linden$ during the week of May 12 through the 19th will be awarded a pair of scissors with which they will shave the heads of the team raising the least amount of Linden$. Last year the Linden and Mole teams combined to raise L$840,639, or $3361, raising the event’s all-time total to more than L$3.5 million and helping the virtual Relay held in Second Life since 2005, to be ranked 4th largest, out of more than 1600 Relay communities in the United States, with an astounding total raised of more than L$100,000,000 in 2021.

RelayStock, which is in its 9th season opens on May 13th with Live and DJ entertainment through Sunday evening May 15th.

The original Bid Me Bald event was created by the Relay Rockers in 2007 as both a fundraiser and a show of solidarity with cancer survivors. Bid Me Bald recognizes with respect and support that chemotherapy and other lifesaving treatments can lead to side effects, notably hair loss.  Bid Me Bald participants choose to ‘shave’ their heads as an act of support and fellowship with our honored heroes.

Find out more about either event at:  RelayRockers.org