While Second Life's more active residents were united in support of the Relay For Life in mid-July, the nation itself appeared to be divided over a controversial trial. A man had been acquitted of murder in the death of a 17 year old youth, and there were numerous protests against the verdict. Because of the ethnic differences, the youth being black and the defendant Hispanic or white (the latter depending on who in the media was speaking), opinions about the trial were portrayed in the national media as being sharply divided among racial lines, and once again the subject of race relations was in the national spotlight. Just how well do we humans treat one another? 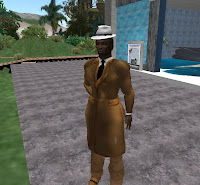 Hamlet Au wrote about resident exploring the issue in Second Life several years ago. when she put aside her white human avatar for a black one. While she got some complements, a few of her friends shyed away, and there was one moment in which a couple strangers hurled racial epitaphs. It was a couple years ago in which I had my own chance to experience the issue for myself for about a month after a "Bid Me Human" for the Relay For Life. I wasn't treated differently by friends, and indeed some people (all users of human avatars) asked me if I would be keeping this new look. It was notable Europeans I knew made good-natured barbs about the avatar while Americans didn't. Only about two friends of mine complained about the avatar, and one was from real life and never came on Second Life, finding out after he read the paper, "Stay foxy."

As Second Life's furred folk on rare occasions suffer some harassment from human avatars (and vice-versa), it's been debated whether this is a form of racism as well. Some, mainly furs, feel it is. Others feel a class of avatar doesn't really count as a race, even in an inworld sense.

How much was the trial discussed inworld? The news got around while I was with some mostly furred friends at a club. Those making an opinion were supportive of the verdict. Another I ran into later disagreed, and commented when he tried bringing up the issue elsewhere, they didn't want to talk about it, saying they came to Second Life to get away from real-world issues. 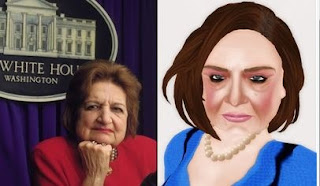 It was last weekend that noted journalist Helen Thomas passed away. She was most well known for her time as one of the White House press corps and her no-nonsense, blunt manner. A few years ago, in March 2009, she appeared with Bob Schieffer as part of a "mixed reality" event with the two on stage at the University of Washington's Edward R. Murrow School while their avatars were at the University's sim in Second Life, footage from the real stage was televised in SL while a screen behind the reporters showed the scene and chat lines in the virtual world. Questions from both the real and virtual audience were given to the reporters.

Following the event, Hamlet Au and Philip Rosedale were invited to have dinner with the two journalists. Hamlet described Rosedale as being "most passionate" in his talk about the virtual world. Thomas however was unimpressed, "I don't like your world. It doesn't have any people in it."

Yours truly got a cartoon out of the event, plus ran into Pooky Amsterdam and kept in contact with her since.

The following year, Thomas resigned following her making some anti-Israeli statements, which were later put up at a Palestinian propaganda sim in Second Life.