Grey Nacht informed Second Life Newser about some US Army experiments with Grid capacity, the MOSES (Military Open Simulator Enterprise Strategy) DSG (Distributed Scene Graph) prototype experiments. Grey told the Newser this is a Department of Defense project on an OpenSim Grid with the goal on Saturday to get 160 avatars going about on the world. She had seen 66 last time, and the DSG code testing suggested it could hold a thousand. 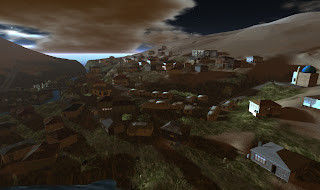 In Second Life, fifty avatars is the most event organizers will usually have in a sim for an event. One can squeeze more in, in the past I've observed 66, even 99 avatars on a sim. Nowdays however, high number events are generally on two or more sims. With this in mind, 160 avatars is certainly an impressive number. A thousand would be just staggering.

This experiment, a scenario in a fictional Middle Eastern place involving avatars taking the roles of "soldiers" and "civilians", takes place Saturday July 20. There are viewers available for PC, Mac, and Linux computers. Following the test, the MOSES DSG Grid will be closed to the public until the next experiments.