"Because We're All Mad Here." That's the motto of a club I was recently shown around, Club Virtual Insanity. Sitting on a sky platform high over the Twilight Shadows sim, the club offers parties six out of seven days a week, with a variety of music genres played. 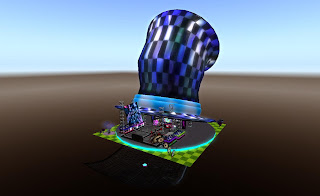 Dropping in on the club, it was shaped like a bent giant top hat. There was a party going on, which included a couple dozen people. Among them was Carla Darkwyr, who told me the place was built by Lily Rootcreeper and Doctor Blackheart. Ichie Kamachi, a live musician, was relaxing there before her live music act later in the evening. The audience and staff were having a good time, sometimes "singing" along with the music in chat, "Hang on sloopy, sloopy hang on!" The side stage had a half ball chair, black on the inside and with teeth on the top edge and a "tongue" hanging out the bottom, underneath a sign for the club, "Club Virtual Insanity." 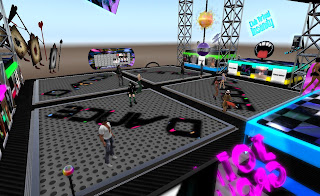 Currently, the club is open six days a week, "Although we are trying for seven," Carla told me, "12 Noon to 12 Midnight." The club plays, "any genre... blues.. jazz.. hip hop.. electronic.. rock.. i'm thinking of spinning some hawaiian music." When asked if a particular kind of music more than others, Carla answered "maybe classic rock, but it is pretty eclectic. … We give (the DJs)pretty free rein to do what they want, so it's fun for them as well as our guests." They have live music events about every week or two, "Ichie and Scarletrose Damour sang last Sunday."

Besides listening to the tunes, there's a trivia ball in which the people can test their knowledge. They have some plans for some special trivia events with large jackpots for the winners. Carla also mentioned a "Mad Hatter" building contest, "builders can contact Lily or myself. We will charge for the 'booths,' then the public can come and judge. (The) winner gets a percentage of the booth fees." The contest is expected to be sometime in July. Lily would later explain that there would be a video of it made to promote "the spirit of the club." 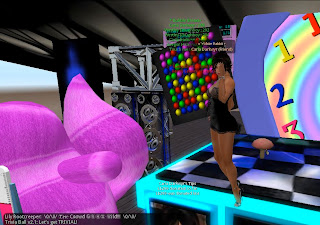 Virtual Insanity also plans some charity events, "We are doing World Day and art auctions for charity in the next couple months. Our opening day was a benefit for the Wounded Warrior Project … all live music." Several musicians performed, "Brixton Canning, Laidback Celt, JC Farstrider, Gina Gracemount, Blueron Clyburn, Terrytoon and Blonde, Anek Fuchs  and Ichie (Kamachi) closed out the night." They also plan on having charity events for autism, cancer, and hopefully "Feed a Smile."

Despite how the team can go like clockwork, there have been a few hilarious bloopers. Carla told about one goof when one of the girls on the dance floor fell asleep, "We wanted to send her home, her family didn't want to leave her here," So they damage-enabled the club, and "I used some gadget" to reduce her hit points to zero to have her vanish and reappear at her home. But it didn't go as planned, "Poof! All the women disappeared." But it was late and they were about to go anyway, so they just had a good laugh in chat before signing off, "I felt so bad though … I told them I'm blonde under all this black hair." 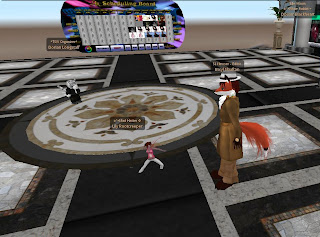 Carla suggested I talk to Lily, as she was one of the more inventive minds around here. As it turned out, Lily was a pixie-sized human avatar. Mentioning Carla's complement of her, Lily commented, "She means I'm crazy (laughter)." Of the club's design, "I wanted it to be simple and fun, and easily modifiable so we can change it in a flash. We 'dress' the club for different events, things are on rezzers and such." As an example, she showed off the club's formal look by bringing out the ballroom, "We rezz it to suit our DJs who play here on Sundays, and we we usually do some live singing (then)."

Besides the charity events, Lily mentioned there would be a burlesque night, "we gots a troupe who does burlesque dances," but this would be mostly flirty and teasing, "we're not into the hardcore sex stuff in Second Life." She also mentioned plans for a "speed dating" night, "we like using our time to help peeps and promote their interests. … we know in SL relationship finding is a thing peeps want ta do."

"Mostly, we want the club to be a fun place. Not too restrictive. And we wanted it to have a greater purpose."

Club Virtual Insanity is sponsored by Sweet Distractions, "They have been so good to us."