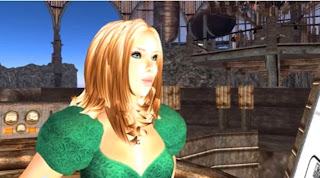 Last week in Second Life, the Virtual Worlds Best Practices in Education conference, also known as the VWBPE, took place. Over four days from July 24 to 27, there were various discussions at the sims designated for the event and at various university areas across Second Life. While most of the events were lectures and talks, there were also building classes and times scheduled for DJ music sessions, plus a raffle. Gentle Heron of Virtual Ability gave the opening keynote address (Youtube link). Daniel Voyager estimated the number attending this event alone at over a hundred.

There were a number of topics, such as a few around the subject of the use of virtual worlds for the purpose of education. There was one discussion by Jo Kay about the use of Minecraft to teach children. Yours truly wasn't able to see most off the events that caught attention. One which I did was AgileBill Firehawk's "Confessions of a Quest Designer," in which he used "gamification" to get students to learn. Another was Kristy Handrick's (Hsiao-Chen Han) discussion about using Second Life to conduct research. 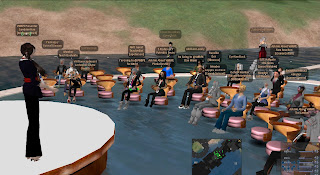 Kristy stated although Second Life's audience was potentially worldwide, two-thirds of her participants were from North America. But the advantage of doing research this way was a shortened process time, since she didn't have to do any travel or spend time finding places to stay, "the virtual world reduced the time that is necessary in real world research. … There was no travel cost, no accommodation fees, and I did not need to leave my job. I think we can say that the virtual world is a good environment for low budget research." As the interviews were done in text, she "did not need to spend time transcribing the interview as well. … Therefore, the time to key in data was reduced as well." One challenge though was judging reactions as "there was no body language and facial or voice expression that could be observed." She took some questions and comments after the discussion, notably one person commenting the biggest problem in getting a college to approve the use of Second Life for education purposes was selling the idea to the committee.

On the day the conference opened, Linden Lab had announced the return of it's 50% discount for educational and nonprofit sims. The news was naturally greeted with cheers at the conference, and some thought it had been timed to go along with the start of the WVBPE.

The WVBPE conference is a yearly event, with information available at http://www.vwbpe.org/ , and has a both Second Life and Facebook groups.