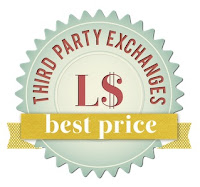 It's been about two months since the Linden Exchanger Crisis in which Linden Lab briefly closed down the Third-Party Exchange Services. The result from the residents was an uproar, especially from non-US residents as they often had problems buying Lindens directly from Linden Lab. Most exchangers folded when the Lindens demanded they shut down. But one, the Podex Exchange, instead tried to reason with the Lindens. It was ignored and then shut down by force. Eventually, Linden Lab partially relented, allowing the exchangers to apply for approval as Third-Party "Linden Resellers." After a few weeks, Podex was back in business.

There were concerns that the market would be dominated by Linden resellers that were subsidiaries of real estate businesses, thinking they'd be able to offer the best deals. But this has not been the case. Of the top five exchangers on the Linden Dollar Authorized Reseller Program website, only one was known for it's sales of virtual property. AnsheX, the most well known, never even made the top ten.

In terms of Euros per 1000 Lindens, the top three exchangers were The Teledollar Cash Service, The Podex Exchange, and the ELDEXchange. Teledollar made the top of the list at 3.34 Euros needed to buy 1000 Lindens. Podex was second at 3.40 Euros. But, Teledollar only did business with US Dollars and Euros. The Podex Exchange worked with those and more, British Pounds, Japanese Yen, Russian Rubles, and more. Recently, they have began accepting Mexican and Colombian Pesos and Peruvian Nuevo Sols.

So despite it's rough treatment from Linden Lab earlier, Podex is alive and well, and offering it's customers good deals.

Podex is a sponsor of Second Life Newser.