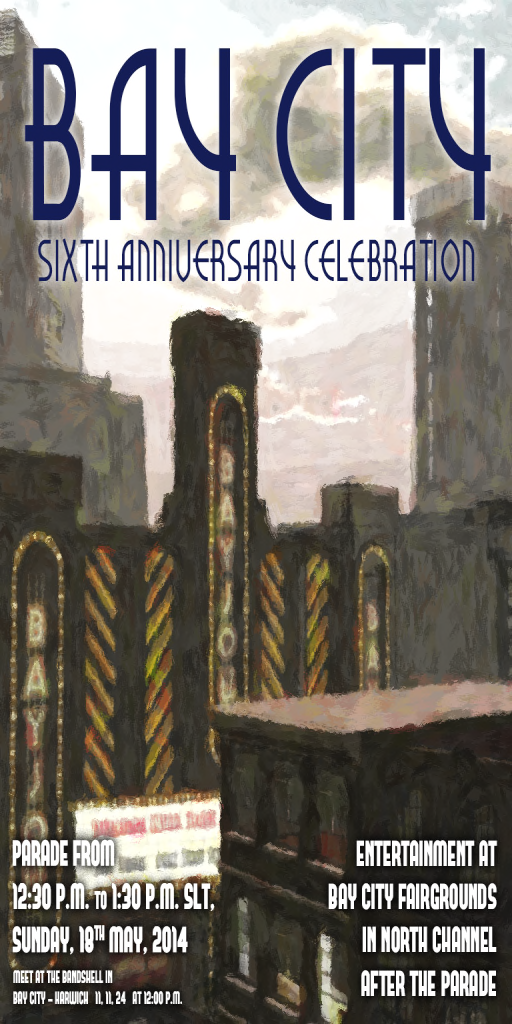 Created by Linden Lab® in May of 2008 and the first of their "Linden Department of Public Works" projects, Bay City has become one of the most popular mainland communities. In honor of the sixth anniversary, Bay City's Residents welcome everyone to join their annual parade and live music event.

Anniversary celebrants will gather at noon SLT/PDT on Sunday, the 18th of May, with a parade lineup at the bandshell in Bay City - Harwich. The parade will make its way down Route 66 beginning at 12:30 p.m. SLT/PDT, concluding at the Bay City Fairgrounds in the North Channel region.

A live concert will kick off at 1:30 p.m. SLT/PDT at the Bay City Fairgrounds, featuring a trio of live acts and including GoSpeed Racer of KONA Stream providing music leading into the event.

All Residents of the Second Life grid are encouraged to participate. Celebration goods are available at the Bay City Community Center, in the Daley Bay region, for those who wish to be a part of the parade, and ample viewing area is provided. The music event is also open to all who desire to attend.